Welcome back to another edition of the TFB Round Table sponsored by Ammunition To Go! For those who are first joining us, this is a multi-part series where TFB discusses the characteristics of great ammunition for specific applications. This could vary from big game hunting, plinking, precision rifle matches, small game hunting, or even pistol competitions. Chances are there is someone here at TFB who can offer you advice on buying the right round for your task at hand. This week I am back on TFB Round Table to discuss and recommend a cartridge that is obscure but also still available today in the firearms industry. The cartridge in question is that of 38 Smith & Wesson. Do you have an old British service or Colt police revolver chambered in this itty bitty lead tipped cartridge? Are you finding yourself pondering why it’s not chambered anymore? Stay tuned! Let’s dive right into the old school 38 S&W and some ammunition options and information to bring your old gat back to the range!

Born in 1877 the 38 Smith & Wesson cartridge was introduced with their Smith & Wesson .38 Single Action revolver, the big sister of the 32 caliber Smith & Wesson Model 1 1/2. The cartridge started its life off using black powder like most did back in that time period. The new revolver chambered in such a cartridge was a smaller pocket-sized gun that had a five-shot cylinder, no trigger guard, and a top break mechanism similar to that of the No.3 top-break revolver I had mentioned in our .44 Russian Round Table article. Those of you that may not be wholly familiar with how Smith & Wesson’s top-break revolvers work, the barrel release latch is located on the top of the frame, just in front of the hammer and usually working in conjunction with the rear sight.  Simply put the revolver in half cock and lift the latch and it will break in half and automatically eject spent shells. Smith & Wesson produced these revolvers in nickel or blued finishes.

Later down the road, there were more variants that added varying barrel lengths, trigger guards, and even a double action model that made it onto the scene in 1880. The Smith & Wesson .38 Single Action was produced until 1911. On Ammunition to Go‘s website they give us a little context on the cartridge in terms of the modern day:

38 S&W ammo is a common round developed in the late 1870’s and still used by revolver shooters today.

While 38 Smith and Wesson is still in use, no common commercial firearms manufacturers are producing revolvers in this caliber and ammunition is very rare as well. Look for 38 S&W ammo for sale from Fiocchi when we can get it as the well-known company still products a 145-grain lead nose bullet cartridge that is available to the American civilian market.

Please note: 38 S&W ammo is not the same cartridge as 38 Smith and Wesson Special and cannot be used interchangeably with that cartridge.

After the end of the first world war, some militaries such as Great Britain began to look for less stout cartridges to carry in their service handguns. Something easy to control as well as comfortable and effective to use in a combat situation. Webley was already the main producer of Great Britain’s service revolver so when tasked with finding a comfortable, accurate, and potent enough cartridge, they settled on a slightly modified version of 38 S&W and introduced it to the British government. It was modified in the sense that it was initially paired with a 200-grain lead projectile and 2.8 grains of nitrocellulose powder. This proved extremely favorable in range testing as well as effectiveness testing on cattle and cadavers. Once accepted it was blandly named “.38/200 Cartridge, Revolver Mk I”. 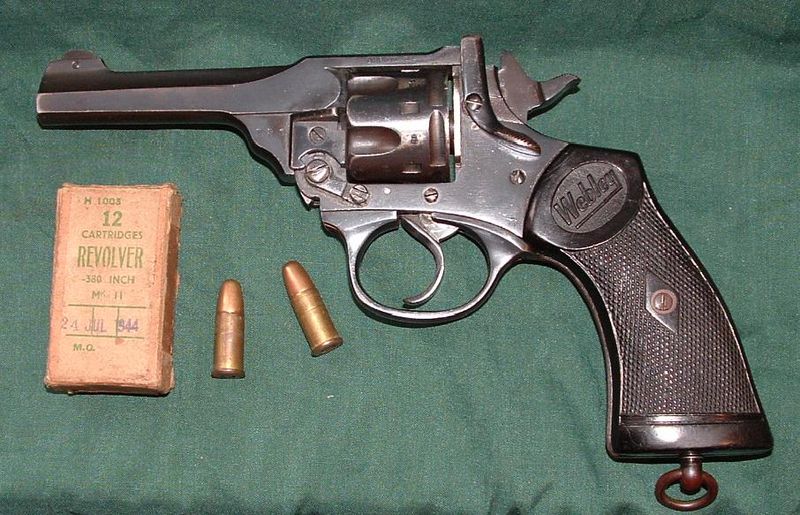 As the phot above gives it away, Great Britain realized that their excellent 38/200 cartridge paired with that heavy lead bullet could be in violation of the Hague Conventions, which outlawed the use of bullets designed to “expand or flatten easily in the human body”. As a result, the .380 Mk II cartridge was born out of necessity and sported a 180-grain full metal jacket bullet. Due to the extreme attrition of another World War, the 38/200 that was retained to just target practice for troops was supplied too along with the newer and more acceptable .380 Mk II to soldiers going into combat regardless of the potential repercussions of using an all lead bullet. The 38 Smith & Wesson cartridge was phased out with the popularity of 9mm and the majority of commonwealth forces being issued the Browning Hi-Power. All sorts of revolvers were chambered for 38 Smith & Wesson: Webleys/Enfields, Colts, H&Rs, Iver Johnsons, and of course Smith & Wessons. This is why today you may actually stumble upon a store that stocks the 38 Smith & Wesson. Most well-intentioned gunshops will usually separate the 38 S&W from the 38 Special due to the average joe not knowing the difference as they are not interchangeable. At one point, Ruger produced limited runs of revolvers chambered for 38 S&W but I am unsure if they still do.

This 38 S&W cartridge by Prvi Partizan offers a 145 grain lead round nose projectile. A lead bullet conveys more benefits than its appealing price tag; its exceptional density also results in superior momentum, and its softness means that it will deform within soft targets, making it not at all an unsuitable choice for self-defense. This bullet’s rounded tip enhances its ability to penetrate targets, and also delivers superior impact energy. Although many would consider it “vanilla,” this type of bullet does indeed have much to offer.

Prvi Partizan is one of Europe’s largest and oldest ammunition manufacturers, and their products are favored for every imaginable application worldwide. You can see why they’ve earned their good reputation by inspecting this round’s components: a high quality brass casing which you may reload several times; clean burning propellant that will preserve your weapon’s inner workings; and a sensitive Boxer primer which remain stay ready to ignite for ages.

Fiocchi is one of Europe’s largest and oldest ammunition producers. This Italian based company has been manufacturing ammunition for the US market in Ozark, Missouri since 1986. Combining the best of Italian style with the best of American innovation, this is excellent target ammo at an excellent price.

This ammunition is non-corrosive, boxer primed, brass cased, and fully reloadable. Each round produces a consistent muzzle velocity of 780 feet per second.