What is the simplest gun you can possibly make? When you hear this question, the kind of gun that comes to mind is probably a simple zip gun, like the one below, which has a forward-moving mass, a trigger, a barrel, and not much else: 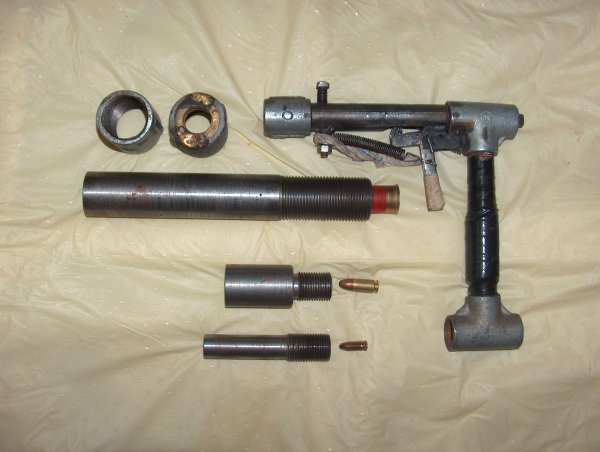 Given modern ammunition, this is basically the simplest configuration that can be made, and is essentially equivalent to a simple blowback submachine gun without the additional complexity of a magazine. Mark Serbu took this basic idea to the next level, creating an interesting machine project that works the same way, but has a much higher degree of craftsmanship. He calls it the “GB-22”, “GB” standing for “gun buyback”:

Redeeming improvised firearms at gun buybacks is nothing new. Due to their “no judgement” policy, and the very low cost to make some firearms (in many cases below $20 a gun), some individuals have taken to turning in homemade firearms as a way to protest the efficacy of the programs, although it should be noted that such activity is potentially very illegal and I do not recommend our readers do this themselves. The GB-22 is an interested “buyback special”, as it is actually very well made; Serbu mills the guns carefully using a CNC milling machine, and while total man-hours per firearm are low, the end results are still – for what they are – very professional looking.

The video also contains a very interesting tutorial on how to make springs for firearms using music wire and a drill press.

Whether it’s the nice-looking GB-22, or a pipe-and-2×4 that is barely recognizable as a firearm, what’s very clear is that the gun genie is most certainly out of the bottle.