Speedy Shotgun Reloads on a Budget In the world of multigun shooting, the real race in most shotgun segments is the reload. It is by far the slowest reloading you do on the clock most matches, and as such, there is much to gain by having a fast shotgun reload. The world of shotgun loading accessories can be rather daunting to a new multigun shooter, and also very expensive. A full kit of a couple caddies or a load2 system can easily run well over $100. As a new shooter, breaking the bank on a set of kit is the last thing you want to do, especially if you’re unsure about the sport. Thankfully, there are a number of inexpensive or free options available, though they are typically slower than a full set of fancy kit.

The first, and slowest option, is the tried and true pants pocket. Cargo pockets can hold quite a few shells, but will be the slowest, as well as the most difficult. Shells will be all over the place, and they are a pain to get out of a pocket, but it gets shells onto your body and accessible for free.

Another option is a pouch on the belt. I’ve used this several times at matches in the past, and have seen many other new action shotgun shooters do the same. It can be anything from a Maxpedition Roly-Poly, to even an old fanny pack, for that hipster-chic 90’s look. This will be faster than a pocket, and a lot of people have something that can be serviceable in this role. Shells will still be loose and come out of the pouch in all sorts of orientations, but it will be faster and easier than using a pocket.

Taking the belt carried option as far as you can go on a tight budget is the use of a shell carrier pouch. These will have elastic loops in them to hold the shells in a consistent orientation, allowing you to get rounds out of the pouch faster and more consistently. I’ve got a nylon shell carrier made by Condor that serves well enough for my skill level for about 15 dollars from a local army/navy shop. MOLLE pouches, like this one, can be used on the belt without too much grief. This will still limit you to pulling only one shell from the pouch at a time, but it is the fastest option so far, and can be learned without much time spent practicing. MOLLE pouches on a molle carrier, like a chest rig or plate carrier is also an option, but it can quickly become more expensive than a more optimal setup.

Reloading from a shell carrier pouch 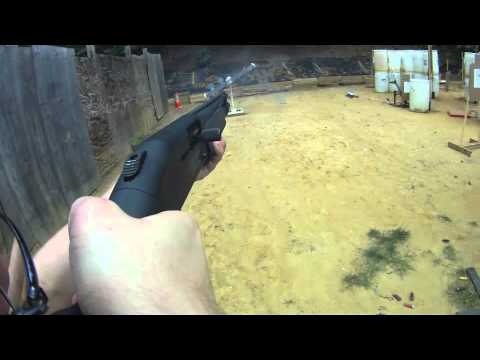 Moving on to gun-mounted ammo, the first and probably most common choice is a side saddle. These mount to the receiver of your gun via various means, and can hold anywhere from 4 to 8 shells, or sometimes even more. These can be pretty quick to reload from with practice, and are relatively common gear. Most shotguns, even less popular ones, should have a saddle available for them. Another option to add another shell or two on an autoloader’s forend are 2-shell caddies that are mounted directly to the forend. A lot of competitors like these to use if they have run out on a stage and only need one or two more shells, as they can grab and load them quickly from a firing-side mounted caddy on the forend.

A slightly cheaper option for gun-mounted ammo is a universal nylon stock saddle. This stretches around the buttstock of the shotgun, holding a number of shells in loops much like the MOLLE pouch. These aren’t that good for getting shells to the action in a hurry, as they are awkwardly placed and hold the shells rather tightly. They can also interfere with cheek weld while support-side shooting, which some courses of fire will require.