TFB Round Table: The 5 Best .380 Rounds for Personal Defense That’s what Clint Smith, notorious pater familias of Thunder Ranch said to me, probably within the first hour I’d ever met the man. Clint is one of the most respected instructors in the gun community so it’s no surprise that his opinion of .380 is not uncommon – it’s shared with, most likely, a great majority of his peers. However, an equally popular opinion is that “some gun is better than no gun.” The modest .380, for a long time, has been seen as a backup gun; only ever on top when we look in the “better than nothing” bin. But for the same reason that 9mm has seen a fierce comeback, the .380 has similarly seen an increase in popularity derived from advances in the platform and performance.

Why would anyone carry a .380 when they could carry a 9mm instead? Many of us question the relevance of the .380; after all, the 9mm promises superior ballistic performance in a comparable package. But why are there so many .380s on the market? And why is the number of models growing, rather than shrinking? It’s simple: .380s can be much smaller and lighter than their big brother nine-by-nineteen counterparts, and they can also be a lot less expensive. Comparing two small and popular variations, the 9mm Ruger LC9 is Ruger’s micro-compact 9 and weighs in at 17.2 ounces with a capacity of 7+1 rounds. Ruger’s LCP – their smallest .380 with a 6+1 capacity? A mere 9.4 ounces. The LCP is almost 10% thinner than the LC9 and nearly an inch shorter in length and height. It’s also easy to pick one up for $190 or less, nearly half the price of the $350 Ruger LC9. Comparing apples-to-apples as best we can with two of the smallest personal defense entries from the same manufacturer, the numbers reveal that .380s can work well in less expensive and easier to conceal packages.

Historically speaking, the popularity of the .380 could probably be placed at the feet of just one gun – the Kel Tec P3AT. While .380 backup guns have existed for a century, many of them can be written off as unreliable boutique or niche guns. Many older .380s are spatially inefficient: The Walther PPK, the Bersa Thunder .380, the SIG P230 and P232, as examples. All of these are excellent firearms, but woefully inefficient when viewed by ratio of weight and size to capacity and power. The Kel Tec P3AT breathed new life into this languishing format by offering a true pocket gun that was inexpensive and reasonably reliable. It sold innumerable copies. The mainstream quickly caught on, with the Ruger LCP providing another similar option from a trustworthy manufacturer, followed by more and more pocket-sized guns from Kahr, Smith & Wesson, and the slightly-larger-than-pocket-size-but-eminently-shootable model 42 from Glock. The gain in platforms chambered for the .380 and the increase in technology improving terminal performance of what many considered to be a mouse round created this cycle of energy that sustained the category’s growth.

Through this joint evolution of the round and the platform employing it, somehow, someway, the .380 became less of a last-ditch deterrent and more of a lethal round. To fairly call a gun/round combo “effective” is to say that it meets the FBI standard of 12 to 18 inches of penetration in ballistic gel. Rounds that can penetrate at least 12 inches and produce good expansion leading to significant permanent and temporary wound cavities are usually deemed adequate for personal protection. Surprisingly, there are indeed a few .380 chamberings that meet this standard. Our partners at Ammo To Go have compiled data relative to the most effective .380 chamberings on the market. I think many of you will be surprised with these results. Here are the Top 5 .380 rounds for self-defense, and how I determined this order:

Using Ammo To Go’s gel testing with a Ruger LCP shooting through 4-layer cloth, I included only rounds that penetrated over 12”. None of the .380 rounds penetrated over 18”, so overpenetration does not need to be considered.

Penetration, expansion, and energy are all important components. According to the FBI and from the July 14, 1989 paper “Handgun Wounding Factors and Effectiveness” by Special Agent Urey Patrick of The Firearms Training Unit at Quantico: “The critical wounding components for handgun ammunition, in order of importance, are penetration and permanent cavity.”

So I cooked up a quick way to devise a weighted performance score favoring penetration first and expansion second. This method may have blind spots but, facially, it seems to yield the correct results so far. I created scores for penetration, expansion, and energy, and we will add them together to make the composite score.

1. Penetration Score: Multiply penetration by 15, creating a top score of 270 (15 times 18”) for the penetration score.
2. Expansion Score: Looking at the second most important factor, expansion, multiplying the average expansion by 300, basically creating a top score of 186 (the round with the greatest expansion in the test has .62” of expansion).
3. Energy Score: The least important factor. We simply add the ft/lb energy score which, in .380, should be in the mid-to-high-100s for most rounds.

Adding those three numbers together to create a composite score, here are the winners: 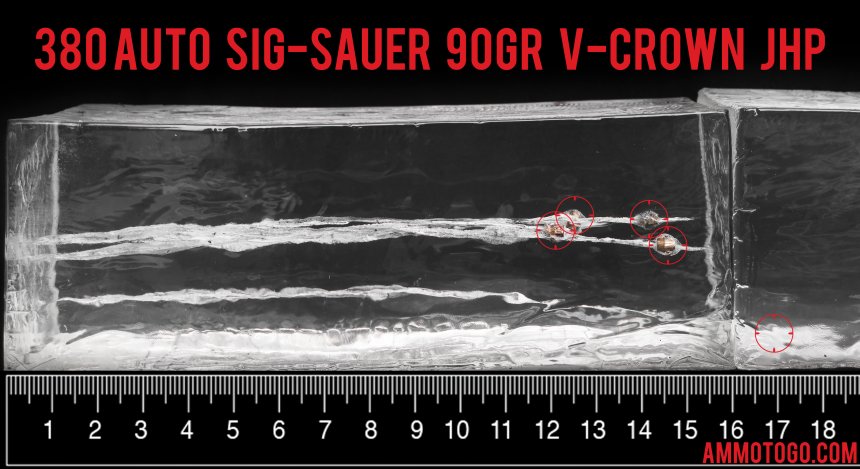 Should the SIG be higher on this list? Possibly. Good 14.36” penetration and the second-best expansion [for rounds that penetrated at least 12”] of almost a half-inch at .48”. It’s actually strange that this round performed so well considering it was pushing a class-average weight 90gr bullet at a slower than average 887fps, leading to herb-like 157 ft/lbs of energy. I’ve seen this before in other SIG chamberings where other competing rounds in the class will push larger bullets, and faster. Maybe it translates into lower felt recoil? Is that a good tradeoff? And does energy in a pocket pistol really matter if the penetration and expansion numbers are already there?

The Winchester Ranger Talon, 95-grain HP had great penetration – the 4th highest of the 19 rounds tested with 16.2” of expansion. It also packed a wallop (well, for .380), pushing a slightly larger than usual 95gr bullet at a slightly faster than usual 907fps, generating 174 ft/lbs of energy. However, expansion was weak, or non-existent, at .35. This otherwise excellent performer was stopped short by an inability to generate as large of a wound cavity as the other rounds on this list. 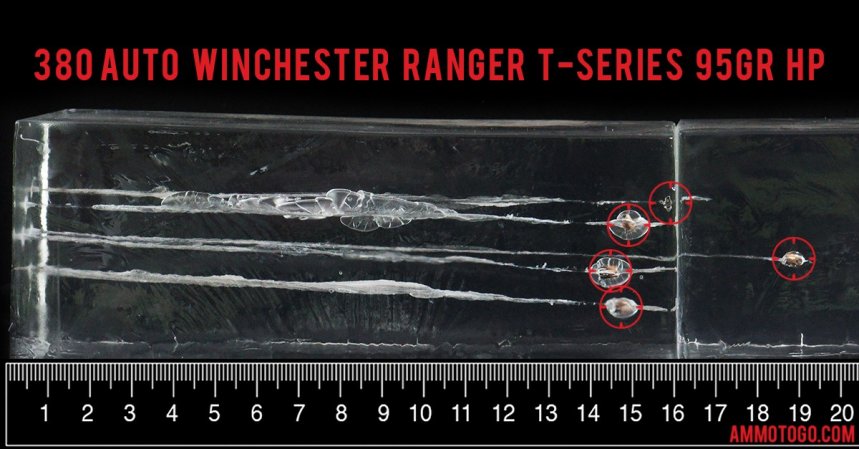 The Golden Saber may have slightly outclassed the Ranger Talon, and the raw score difference of just 3 points shows that. Penetration was 16.1”, just a tenth of an inch shy of the Ranger Talon, and expansion was 2 hundredths of an inch greater at .37” – not that great, either. The Golden Saber put up good energy numbers, moving a large-for-the-class 102gr round at 871fps, making 172 ft/lbs of energy. Wound cavities in the gel look pretty impressive, also. 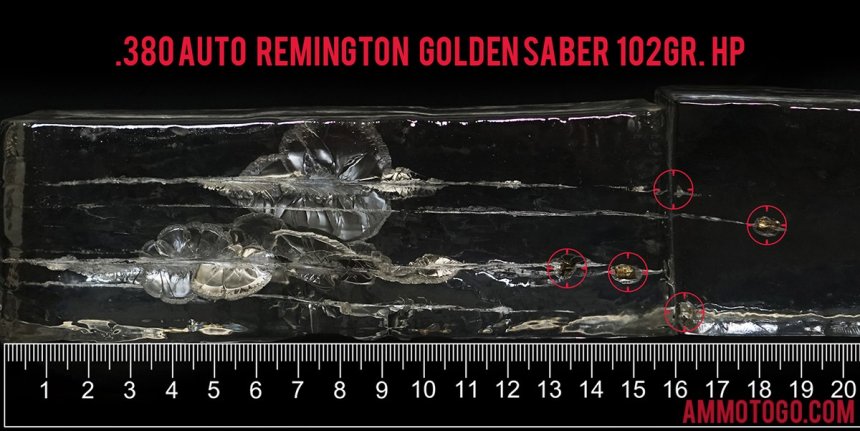 Basically, the Winchester and Remington are tied for performance on paper. However, looking at the tracks in the gel, I might give the edge to the Remington for generating a larger wound cavity, although we’d need more data to verify that this happens consistently.  We’ll just call it a tie for now. 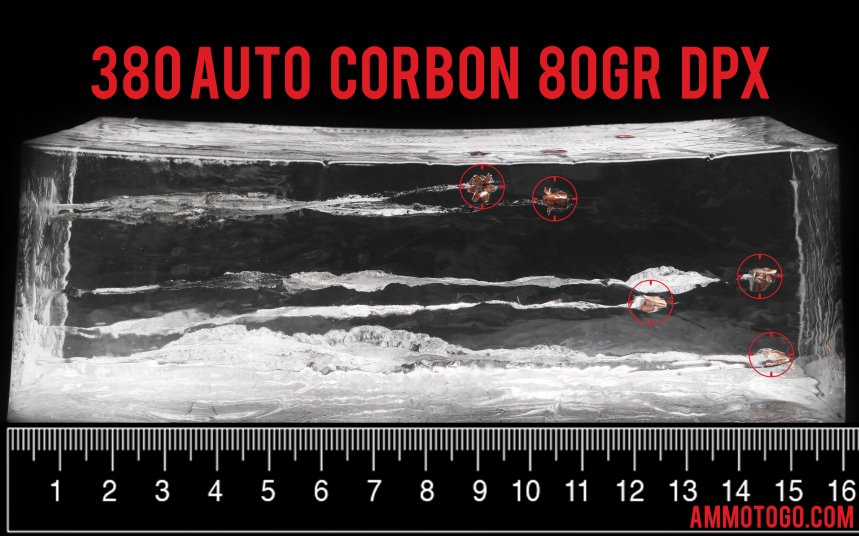 Do you have the NEED? THE NEED FOR SPEED? The lightweight 80gr DPX put up the best velocity numbers with a blistering 1091fps (but it is, of course, pushing a tiny 80gr bullet). This leads to 211 ft/lbs of energy, which is one of the higher numbers in the test. The 12.76 inches of penetration is on the right side of acceptable, and all that speed gave the DPX far better expansion, with a decent .47 inches – the third highest for rounds penetrating over 12”.  Note that expansion did, however, appear to be inconsistent:

The top penetrator on our test pushed through 4 layers of cloth and 17.4” of gel, bringing it right to the doorstep of the FBI’s optimal performance number of 18” of penetration. The 102gr round is the same weight as the Remington Golden Saber at #4, but the Ultimate Defense chugs this payload at 896fps, or 25fps faster than the Sabers. The 182 ft/lbs of energy is nothing to scoff at, but the measly, non-existent .35” of expansion is. I honestly would feel better with the SIG ammo at #5 over this non-expanding Ultimate Defense. But if you want pure penetration (lol), this is your joint.

Another top 5 list and another Federal round sitting atop it. Even with a random math formula attached to the list, you can’t beat down the Fed, who seem to make the best defense round across the range of defensive pistol calibers with the venerable HST.

There were no complete rounds on this list – everyone fell a little short somewhere. The Sig at #5 had low energy, the DPX at #3 had inconsistent expansion while the Remington and Winchester entries at #4 and #2 had virtually no expansion. But the Federal HST was, as usual, the most complete of the competitors. An impressive, consistent .59” of expansion made it the top expander in the test (for rounds that penetrated at least 12” of gel). It also pushed a heavier 99gr round at a faster 956fps, which is no doubt the secret sauce for creating good expansion and penetration, all the while delivering 201 ft/lbs of energy – one of the most energetic of the test. The 12.26″ of penetration barely meets the FBI’s requirements, but the important part is that it does indeed meet those requirements, with good expansion and power to boot. For being the most complete round of the test, HST takes the cake (yet again).

NOICE. Consistent expansion of .6″ with the proven HST round.

You can find the results of all .380 Auto cartridges tested by AmmoToGo by clicking HERE.