The Canadian Rangers will soon all get their hands on the newly adopted C-19 Ranger Rifle, developed by Sako and made in Canada by Colt Canada. The new rifle’s procurement is set to begin in 2017, reports the Canadian Broadcasting Corporation, which will inaugurate a three-year phase-in period that will be completed by the end of 2019, by which time any Ranger who wants one will be able to use the new rifle. From CBC:

The summer, the government signed a $32.8 million contract with Colt Canada to manufacture 6,820 rifles. The guns will be distributed to the Rangers starting in early 2017 and phased in over three years, until they are fully equipped in 2019. 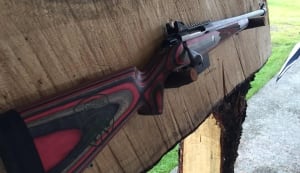 The new rifle for the Canadian Rangers, the C-19, has red markings that will make it highly visible. (Dave Croft/CBC)

The guns were designed by Finnish gunmaker, Sako Tikka Rifle, but will be made at a plant in Kitchener, Ont., which is expected to hire an additional 30 people for the job.

The design was modified after testing in the field, said Hahn.

“It has been tweaked to our needs and has been thoroughly tested both in the lab, in colder environs, as well as out on the land,” he said. “It performs very well after being in the back of a sled or qamutik, and fires every time you pull the trigger.”

The new rifle has a number of advantages over the aging Lee-Enfield rifles it will replace, Hahn said.

“It’s lighter, easier to handle, and for me as a left-handed shooter, I’m able to manipulate the bolt a lot easier than with the older rifle.”

Hahn added, the new guns are adjustable which will allow each gun to be adjusted for the Rangers’ physical dimensions. That had become a problem with the Lee-Enfield rifles, he said.

“The parts are not made any more, haven’t been made since 1954, and as a result you know some of the shorter-statured Rangers had trouble with the longer stocked rifles,” said Hahn.

Versus the prototypes, the production C-19 rifle’s stock uses a brighter red laminate color instead of the older yellow-orange and grey for improved visibility in the snow, changes to the sling mounts, as well as other minor changes that have not yet been publicly detailed. The Canadian government is set to procure almost seven thousand of the new rifles to replace their stock of aging WWII-era No. 4 Lee-Enfields.

The C-19 is a fascinating anachronism: For the first time in 75 years, a government has held trials to select a bolt-action rifle not for precision sniping or training, but as a standard issue arm for troops in the field. Of course, the Rangers are not exactly soldiers (and the C-19 comes with no bayonet mount or grenade launcher provision!), but the trials were no less rigorous. The result is the first service bolt action design in the better part of a century, and an interesting analogue to Jeff Cooper’s “scout rifle” idea put into actual practice in the wilderness environment where it is best suited.