On Day 2 of the SilencerCo release event, we got to shoot the shorter 6″ version of the new “Salvo” shotgun suppressor. With its shorter length, it is louder than the longer 8″, 10″, and 12″ versions, but I took about 10 total shots with no ear pro and it was fine. If I was going to shoot more rounds such as trap/skeet/sporting clays in one go, I might consider wearing ear pro, or finding a lighter load to see if it would further reduce the noise. 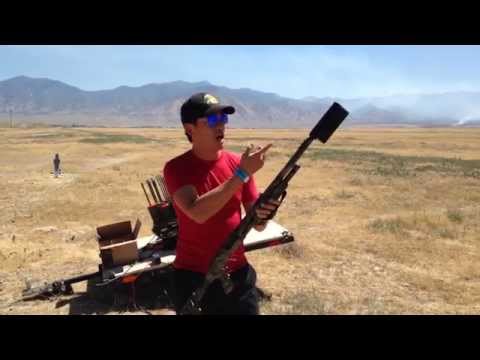 Here are some answers to some common questions I’ve seen:

Q: How does it install? Are there chokes?

A: You have to buy proprietary chokes from SilencerCo which have a special threaded end for the suppressor. The chokes range from IC-Full and will be available in Fall 2014 for sale along with the Salvo. You can shoot the gun with the chokes installed, but with the suppressor removed. The installation is really straight forward where you install the suppressor and then turn a ring to tighten and clamp.

Q: Can you explain the modular feature?

Q: Does it affect recoil?

A: Yes, it greatly reduced perceived and felt recoil. I found it easy to keep my sights aligned and transition from target to target.