The biathlon has been an Olympic sport since 1960. It’s a combination of cross country skiing and rifle shooting in the prone and standing positions. Athlete’s get their heart rates going skiing a course, and then they have to shoot five circular metal plates on each round. In the prone position, they shoot at 45 millimetre (1.8 inch) plates, and at 115 millimetre (4.5 inch) plates.

The sport originated from Norway where it was an alternative to training for the military. One of the most popular rifles is the Anschütz 1827F Fortner .22LR rifle. According to Anschütz, “More than 97% of all biathletes worldwide rely on the ANSCHÜTZ precision rifles made in Germany.” Men’s and Women’s biathlon is occurring almost every day during the 2014 Olympics in Sochi, Russia.

Barreled action:
The straight pull action with repeating device which is reliable at all weather conditions in connection with the match two-stage trigger adjusted to 550 g allows very fast and reliable repeating which results in important seconds for the success.

Barrel:
Cold-tested barrels guarantee an excellent shooting performance even at extreme temperatures of -20°C. The rifle is equipped with a special front sight with snow cover, which prevents snow deposits on the sight and which can be opened and closed quickly.

Stock:
The new ANSCHÜTZ biathlon stock fulfils all requirements of a modern biathlon competition rifle with regard to ergonomics and aerodynamic. Shortened 5-shot magazines were laterally incorporated into the stock to reduce the surface on which the wind can act. In addition non-slip magazine bottoms make the handling of the loading process easier. An additional magazine release lever on the side makes an even faster exchange of the magazines possible. To speed the reloading process the extra cartridge box for 6 cartridges has been placed at an ergonomically especially favourable position in the stock. The height of the forend can be adjusted to the individual shooter by two forend raiser blocks to the maximum length of 12 cm allowed by the IBU. A clamping piece in addition makes an individual length adjustment of the harness sling possible. 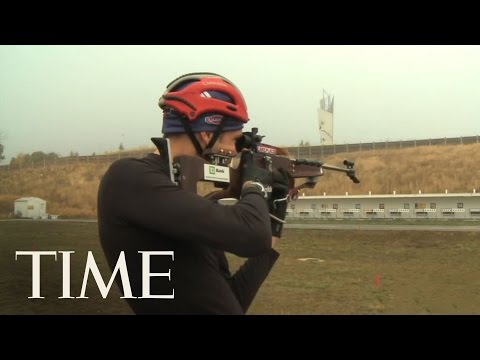