After the appearance of the TAVAR at SHOT Show, there has been much speculation as to who will bring the Tavor to the USA and how much it will cost. A post at AR15.com suggests that IWI is manufacturing the receiver in the USA and importing parts kits from Israel. The US semi-auto Tavor will be manufactured in the US by IWI. Charles Daly and Trans World Arms will not have anything to do with the manufacturing of this firearm.

It will be made from Israeli imported parts and US sourced parts in full compliance with 922(r).

The semi-auto construction and engineering has been approved by BATF&E.

The Tavor accepts AR-15/M-16 mags, including PMags. Which mag will actually be supplied with the Tavor has yet to be decided.

The sample shown at SHOT, with a 16″ barrel (cold hammer forged, 1:7 twist, chrome lined) and full length Picatinny top rail, is only one configuration that is contemplated. (Actual production of this model will have a 16.5″ barrel in order to meet the US minimum 26″ OAL.) Other models could include a 18″ version with or without the Mepro 21 reflex sight; perhaps to become the “IDF” model.) The number of models to be offered has not been finalized.

Initial deliveries are projected to be on the market by the end of October, hopefully sooner.

The projected MSRP (for models without optics) will hopefully stay under $2k.

I did not see the model pictured above that was at SHOT Show. It was unfortunately nowhere to be found when I went to visit the CD Booth. The receiver design is quite different from the Tavor models IWI lists on their website. This version features a long full length top picatinny rail, not just a short forward rail. The iron sights are a nice addition.

I fear that this is a bad time to bring a new, expensive and non-AR-15 gun to market. There is going to be a big gun buy up pre and post-election. After that, maybe 2nd quarter 2013, there is bound to be a slump. If they start production in late 2012, or early 2013, by the time they have everything running smoothly, they will be right at the start of the post-election sales downturn. I hope this gun does not suffer the same fate as the Steyr AUG. 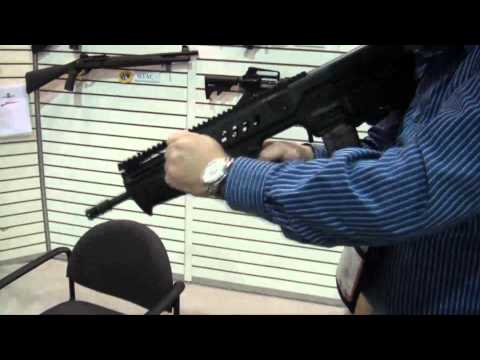