This video shows an impressive homemade CO2 powered fully automatic air gun. The magazine holds 23 AA batteries and it can fire them at a rate of 600 / minute. It is impressive how well it cycles. 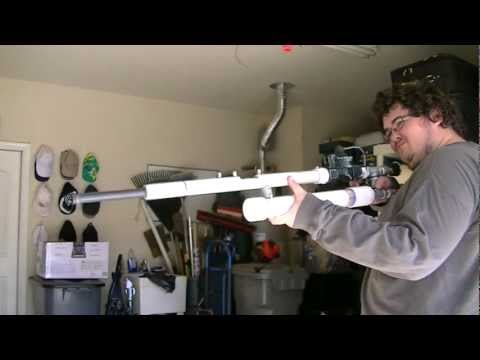 When the gun is fired, the bolt blows forward and clears a plug allowing air to flow though it in to the barrel.

Cost to build the bolt & barrel (excluding tools): $10 and i still have enough pipe to make 3 more.

Estimated cost to build the rest of the gun: $30 (would be cheaper if i used all PVC)

I do have a smaller full metal tank that i will be testing with shortly – a smaller tank will increase the ROF but will decrease its power.

[ Many thanks to Victor for emailing me the link. ]