Posted January 11, 2013 in Reviews, Shotguns by Nathan B with 25 Comments
Tags: shotguns, video Revealed at last year’s SHOT show, the Kel Tec KSG (Kel-Tec Shotgun) has been one of the most sought after new guns in recent days, selling on gunbroker for sometimes 50% over MSRP. This, I’m sure pleases the dealers trying to keep them on the shelves. Recently, I was sent one to look over and evaluate, along side Phil, who also received one, and reviewed it previously.

The KSG is a 12 gauge, pump-action shotgun. What sets it apart is it has a bullpup (action behind firing hand), dual magazine design, making it very compact, and with a capacity unrivaled by most pump guns, 6+6+1, while maintaining a very short 26.1” overall length, and an 18.5” barrel. It weighs just about 7 pounds unloaded, and 8.5 lbs loaded.

The controls are fairly simple, and consist of a crossbar safety, an action release on the front of the trigger guard, the pump, and the magazine selector at the front of the receiver. The only one that is somewhat awkward to operate is the magazine selector, which requires moving a hand to the rear of the gun to operate, but isn’t difficult to do so. All of these controls can be operated ambidextrously, making the gun lefty friendly as well.

Stripping the gun consists of pushing the 2 take-down pins out of the grip assembly, which allows the grip assembly to be removed. 2 holes are provided in the grip to stow the pins while the gun is apart. After that, pull the stock out of the back of the receiver. Retract the slide, which allows the bolt to be twisted 90 degrees, and pulled out of the receiver. Personally, this is as far as I would take it down, however the manual also enumerates removing the barrel. To do this, you take a coin, quarters work best, and alternate backing out the 2 screws on the muzzle end of the magazine tubes by 1/4 of a turn, ad nauseum, until they are loose. Push the slide forward, while pushing down on the double feed eliminator link (the small loose metal piece between the underside of the magazine tubes. This should separate the barrel, top rail and pump from the magazines and receiver. To assemble, place the double feed eliminator back where it came from, and press down on it while sliding the magazine tubes back into the pump. Now tighten the 2 screws on the muzzle end, alternating 1/4 turn at a time until they are completely tight. Retract the pump, and insert the bolt so that it sits on top of the action bar, rotate it 90 degrees so that the extractor is facing the bottom, then push the pump forward until the bolt locks closed. Then reinsert the stock. If the stock is difficult to push in, pull the firing pin towards the bottom of the receiver (This can be maddeningly difficult if you forget to pull the firing pin, as the stock simply sometimes will not seat without it.). With the stock seated, Take the grip assembly, insert the front tongue into the lug for it on the magazine tubes, then rock it back into position under the receiver. Reinsert the 2 take-down pins, and perform a function check.

The first thing that came to mind after firing this gun is, simply put, pain. This gun recoils like an angry mule, especially with appropriate defensive loadings, like slugs and 00 buckshot. The first trip to the range with the KSG resulted in a painful bruise on my shoulder for the next several days, after having fired 11 1oz slugs and 40 rounds of cheap birdshot. Other than the pain, however, it wasn’t an uneventful range trip, as I had several feeding issues in those first 51 rounds. The majority of them, were the shell simply missing the chamber slightly, running headlong into one edge of the chamber or another, easily remedied by a short cycling of the pump. I’ve noticed this feeding issue in the Ithaca 37 as well, which has a very similar action, with the lifter serving as the ejector, ejecting from the bottom. I also had one failure to extract, leaving an empty hull in the chamber, and a fresh shell on the lifter. Clearing this the first time took me about 5 minutes, although by the end of my time with the gun, I was able to clear them in closer to 1 minute, which although faster, is still quite slow, and frustrating. 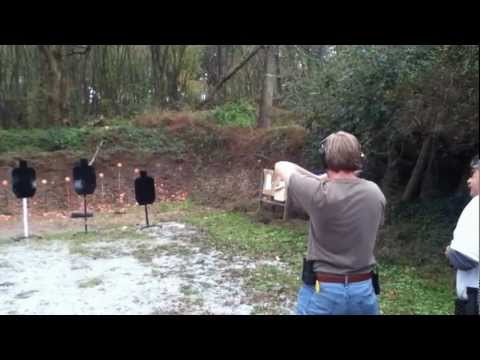 Reloading this gun is one of the biggest challenges in its manual of arms, especially without muzzle sweeping yourself or someone else. I found the fastest and safest way for me to do it was to rotate the gun to the outside, to expose the loading gate to your support hand, dig the stock into your hip, and load each tube from there. The trigger is solidly ‘meh,’ not anything to write home about, but acceptable for a defensive shotgun. I found no issues with its accuracy, and was able to hit what I wanted to out to 50 yards, and trust that it will do fine out farther.

I used the KSG in a local 3-gun match, and I had a few complaints about it in that role. The cylinder choke didn’t keep enough birdshot on target to knock over one of the farthest steels on the first stage, but other than that had no problem activating targets. I ran into some sticky extraction on the first stage, which devolved in the second and third (sadly, not filmed) stages into failures to extract. When I was on the clock at the match, I only ever reloaded one tube, because I never needed more than 3 tubes worth of ammo (during the second stage, If the shotgun hadn’t jammed, I wouldn’t have had to reload at all, providing that I didn’t miss).

The gun patterns fairly tightly for a cylinder bore gun buckshot holds center-mass out to 15-20 yards, after that I’d recommend using slugs.

Pros and Cons
The KSG is definitely an innovative gun, a fresh face in the somewhat stagnant shotgun market. It’s compactness combined with magazine capacity make it easy to tuck into a small storage compartment or case discreetly, and its magazine capacity is unrivaled in the vast majority of shotguns. The thing that strikes me the most about this gun though, is its ‘cool factor.’ It definitely won’t win any beauty contests, but It has a definite space-gun look and feel to it, and with birdshot it is quite fun to blast about with.

However, there are a quite a few detractors for me, the first being this guns hit-and-miss reliability. For the roughly 300 rounds I put through this gun, the number of feed interruptions and outright failures to extract are simply unacceptable to me. A pump shotgun should be one of the most ruggedly reliable guns in a shooter’s collection, and this one simply isn’t. I wouldn’t trust it in a defensive situation, and would hesitate to purchase it, based on that alone. The second irksome quality is its harsh, borderline obscene, recoil. As a shooter who has been known to enjoy shooting several dozen rounds out of a M91/30 for plinking, to enjoy the recoil, and busting apart a target downrange, the KSG’s recoil is downright unpleasant, especially with 00 buck and slugs. I was going to fire some 3” rounds out of it, but couldn’t work up the courage. Lesser problem factors to me include the complicated takedown/assembly procedures, which can be frustration inducing, and a possibly fragile bottom rail. I haven’t personally experienced breakage of the polymer bottom rail when using a VFG, but have seen reports of it.

Finally, a huge issue for me, is the price. At $1080 (as per the Kel Tec letter posted earlier) MSRP, and examples selling for much more than that, I personally wouldn’t be able to justify purchasing this gun. If you have that kind of money burning a hole in your pocket for this gun, and you want a cool-looking range toy, go for it, but in the end, were I to be given the MSRP for this shotgun, to go spend on a pump shotgun for defensive purposes, I’d go buy an 870 Express and a Mossberg 590A1 instead of this one. The concept is cool, but the execution, sadly, just isn’t there.

EDIT: To reflect the new pricing as announced by Kel Tec