When you were a kid, did you ever dream about going back in time and fighting the nasty villains with modern weapons? Some AR-15s at the Alamo would surely change the situation. Even a crate of Springfield 1903s would really help to win the Revolutionary War. But in reality, when someone creates a firearm that is truly ahead of its time, it rarely gets instant recognition. And the Browning Hi-Power is a good example of that.

It was designed in the early 30s, at the same time with other famous WW2 pistols: German Walther P38, Soviet Tokarev, Polish VIS, Finish “Lahti” or French Modèle 1935. Browning Hi-Power clearly had a lot of advantages over other handguns of that era. Arguably, it had the best ergonomics, the field strip was easy and straightforward and, most importantly, HP had the largest magazine capacity, 13 rounds, instead of 8 with every other pistol. I am sure someone might say that magazine capacity doesn’t matter… OK, Lord Fudd, be as it may, but let’s look at the evolution of the handgun. Now, in 2021, every decent duty pistol has a high capacity magazine, even the guns that were not meant to have one (hello, Glock 43X and Shield Arms mags).

But for some reason, the capacity advantage of the Browning HP was not instantly recognized, and only in the early 80s, pistols with high-capacity magazines started to take the spotlight. Glock, Beretta, SIG – all the brands that still dominate the market today.

But before Beretta M9 and SIG 226 was accepted into service, the FBI Hostage Rescue Team (HRT) already had a high-capacity 9 mm pistol – a Browning Hi-Power. Created in 1982, FBI HRT quickly became one of the most capable counter-terrorist units in the world, but there was no way they could do their job with standard FBI handguns – S&W revolvers.

The private industry often comes to the rescue when the government can’t provide a decent firearm, and that is exactly what happened with HRT pistol. A company owned by Wayne Novak, a young gunsmith who was also an avid IPSC shooter, provided custom Browning Hi-Powers for the unit.

The custom package wasn’t always exactly the same, but generally, it was done on MKII pistols with ambidextrous safety and included removal of magazine disconnector, a mechanism that blocks the trigger mechanism when the magazine is not inserted, which not only simplifies the manual of arms but considerably enhances the trigger pull. Also, the stock hammer, which often pinches the skin in the web of a shooter’s hand, was replaced with a custom hammer designated “NO BITE”.

Some pistols had checkering on the grip, match barrels, beveled magwells, and were shipped with 20 round Mec-Gar magazines, but the most famous upgrade was “Novak sights”, Lo-Mount 3-dot night sight that quickly became an industry standard for a duty handgun. Around 250 pistols were built over the years, the primary gunsmith who worked on the guns was Kurt Wickmann, who later started his own company. Unfortunately, most of those pistols were written off and destroyed by the FBI in the 90s, and these days we only see clones of the original FBI HRT Browning HP.

Other countries, especially former British colonies were way more frugal with their High Powers. And while the UK replaced their Browning HPs with Glock 17s, Canada and Australia are still using Browning HPs to this day, and many soldiers still love old HPs. I’ve encountered that special relationship a few years ago when I worked as an armorer in Iraq. During the inspection, in the darkest corner of the cave-like basement armory, I came across a few boxes filled with old Browning HPs: dirty, dusty and forgotten.

The local storekeeper saw my confusion and answered before I even asked: “No need to inspect them, nobody used them for many years”. I left that armory with a heavy heart, knowing that in a gunshop those pistols would quickly find caring and loving owners, but instead, they were locked away, maybe forever… I could not get those poor High Powers out of my head.

Next time I came to the same region I couldn’t believe my eyes. Old Browning Hi-Powers were back in business. No more dust, blued slides were shining under the powerful lights in a new armory, and every pistol had at least two loaded magazines. After a little bit of cleaning, old High Powers were ready for a new chapter in their life

“What happened?” – I asked my friend who was in charge of the armory. “See, mate, we have this new contract with Australians, we offered them Glocks, we offered to buy new pistols for them, but they said they rather use Hi-Powers”. Needless to say, I was very happy and made sure all guns are repaired, cleaned and well oiled before leaving.

The love for Hi-Powers is quite strong in Iraq, and not just among Australian contractors. Once I was lucky to come across “The Glock shop” in Erbil, and the owner showed some custom work he does in-house. And while I don’t like decorated guns, this example left me speechless. However, no one should idealize the Hi-Power. In general, it is slightly less reliable compared to modern pistols and needs a little more maintenance. I learned it the hard way in South Africa, where my good friend, a former Rhodesian policeman, had a Browning Hi-Power in the car when we were in Capetown.

On the second day, we finally went to the range, a magnificent place called False Bay, where an old quarry was turned into a range with multiple bays and an improvised shoothouse. The first few shots were a disappointment, the pistol was dirty and had a few stoppages. I gave it a quick clean and the pistol started working, but soon I realized that the biggest issue was not the lack of oil, but my grip.

With the standard “thumbs forward” grip my left thumb would engage the slide stop, and the pistol locked the slide to the rear while the magazine still had ammo. Not a comforting discovery, since that Browning HP was the only pistol I had access to in case of an emergency. But despite that little issue, I really enjoyed shooting it and eventually learned to change my grip when I grab a Hi-Power.

So the reliability of Browning Hi-Power depends, more than anything, on his user. And HP probably had more users than any other pistol in history, often being a part of the armament for both sides of the conflict. Nazis used it after they occupied Belgium in 1940. British SAS soldiers had HPs since WW2 and used it all the way through some of their most famous operations.

It was procured by the CIA for MACV-SOG Reconnaissance Teams in Vietnam and served as a main sidearm in Israeli Special Forces. Saddam Hussein carried it in public, and when Libyan dictator Muammar Gaddafi died, a golden Hi-Power was found next to his body. 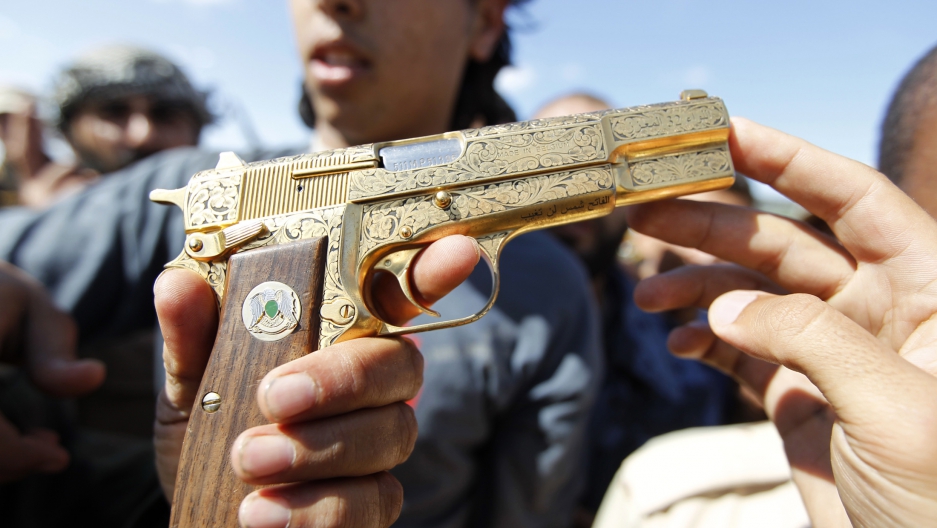 The list can go on and on, and Browning, just like any other weapon, is just a tool in the hands of people. Hate, hostility, resentment – those are all human properties, and guns can’t be good or bad.

In 2018, FN Herstal discontinued Browning Hi-Power from production. Meanwhile, different versions of HP are still produced in several countries and millions of pistols are still in circulation.

Let’s hope that all those Hi-Powers across the globe will find loving and caring owners, who will appreciate the legend of the pistol that was at least 40 years ahead of its time.