Selecting a good defensive round is one of the most overlooked but perhaps one of the most critical elements of selecting your tools for self-defense. Arguably, ammo selection is just as important, if not more important than selecting the gun itself.  However, I would guess that most shooters simply go to their local Academy, plunk down a $20 bill and ask for “a box of them hollow points.”

That may have been the easiest way to do it for decades, at least until Al Gore invented the Internet. It is much easier today for concealed carriers, law enforcement, and regular people looking for the most effective payload for their home defense handgun to figure out what works the best with a modicum of research.

Speaking of technological advancement, nothing else in the industry has seen a plot arc (or plot trajectory if you want a pun today) like the 9mm cartridge. Nine millimeter Parabellum, literally “9mm for war,” was invented in 1902.  And it was used for that precise purpose, used in most – if not all conflicts – since World War I. There’s hardly a better endorsement for the lethality of any particular small arm round then being employed by any number of sophisticated militaries and not-so-sophisticated irregulars at any given time.

The popularity of the cartridge continued to soar because of its reliability, effectiveness, and the ability to afford decent capacity and mild recoil in semi-automatic pistols.  The Indiana State Police was one of the first law enforcement agencies to officially adopt the 9mm cartridge in 1967 or 1968 when it issued the Smith & Wesson Model 39.  The US Military adopted the round in 1985 alongside the Beretta M9.  The nine’s popularity continued to ascend through the 1980s with new and old manufacturers jumping on the bandwagon, including a small Austrian upstart company called “Glock” in 1982.

On that morning, an FBI team on stakeout spotted Michael Lee Platt, a former Army Ranger, and William Russell Matix, a Marine.  The pair had committed a series of robberies in a black Monte Carlo, and once the stakeout team spotted the vehicle, the agents ran the two men off the road.  The shootout known as the “OK Corral of the 20th Century” then ensued.  No one knows how many shots were fired: the involved agents’ memories were understandably blurry, and there are stories that locals were collecting shell casings as souvenirs before the scene had been secured.  All told, Platt and Matix were shot 18 times before they expired. The FBI agents had three 9mm pistols, five .38 Special revolvers, and two .357 Magnums among them.  (All handguns were Smith & Wesson.)  Two agents were killed, and five wounded. Blame fell on the 9mm’s lack of stopping power, and the FBI’s subsequent pursuit of a more powerful handgun cartridge led first to the 10mm, and ultimately culminated in the ratification of the .40S&W for agency use (a.k.a. the “10mm short” or the “40 Short & Weak”). The 9mm round fell out of favor with law enforcement and, as it tends to happen when the pros trend one way, so did the civilian market. Almost overnight, 9mm became the official pistol for the elderly, “non-operators,” and shooters at risk of seizure from loud noises and/or strobing effects.

How times do change. Almost 30 years later, the FBI pulled a complete one-eighty. Due to the technological advancement of available self-defense loadings and the aforementioned capacity and recoil advantages, 9mm rose again into the good graces of the Federal Bureau of Investigation.  In 2014, the Bureau completed a report supporting the re-adoption of the cartridge which was published on this very blog (see here). One of the main conclusions from the report – and I quote, in big bold letters:

Other conclusions from the report praise the technological advancement of the caliber over the past few decades:

Finally, the big one:

The FBI had been aware of the fact that penetration is critical to terminal performance since, at least, 1989.  From the July 14, 1989 paper “Handgun Wounding Factors and Effectiveness” by Special Agent Urey Patrick of The Firearms Training Unit at Quantico:  “The critical wounding components for handgun ammunition, in order of importance, are penetration and permanent cavity.”

A projectile must penetrate deeply enough into the body to reach the large vital organs […] in order to cause rapid blood loss. It has long been established by expert medical professionals, experienced in evaluating gunshot wounds, that this equates to a range of penetration of 12‐18 inches, depending on the size of the individual and the angle of the bullet path (e.g., through arm, shoulder, etc.). With modern properly designed, expanding handgun bullets, this objective is realized, albeit more consistently with some law enforcement projectiles than others.

Thus, penetration being the most important factor, second to expansion, which rounds offer the best performance?

The 5 Best 9mm Rounds: Who Decided this and How?

Andrew gave us these results based upon his experience with these specific rounds and their performance in his testing. Andrew cautioned that using averages can sometimes be misleading if there are significant outliers, and that results in clear gel can sometimes be inconsistent. With those caveats in mind, we looked at the Ammo To Go data against Andrew’s own data and experience and cooked up a list. This light but speedy 115 grain round kicks out 400 ft/lbs of energy. Yes, the penetration in the Ammo To Go testing was one of the shallowest at 13.76″, but not only did it still push decently past the 12” minimum performance standard, the Black Hills had the greatest expansion at 0.69″, blooming to double the size of many of the much faster options. That means a huge permanent cavity. 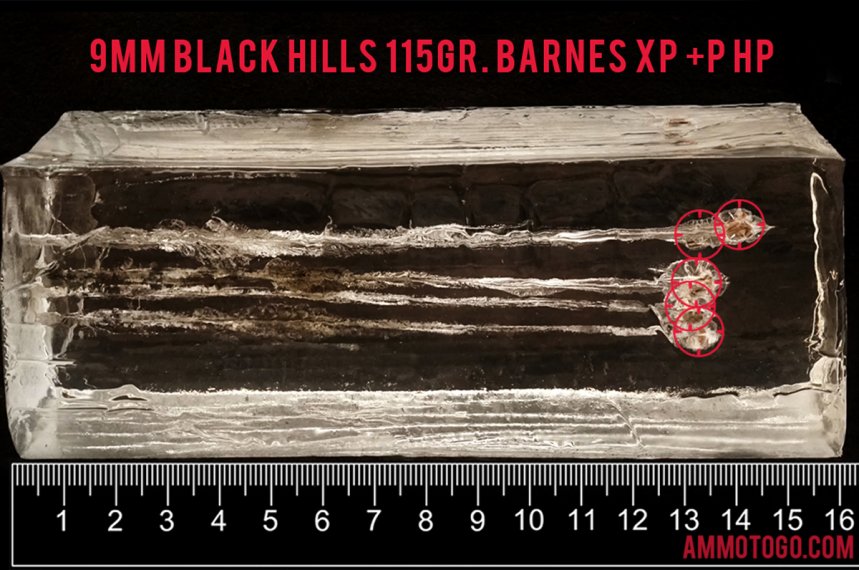 According to Ammo To Go’s testing, Critical Duty pushes out 21.84″ of gel penetration with an average of 0.42” of expansion at an average of 1,009 feet per second.  This is great penetration and expansion, and decent speed from a relatively heavy round (135 grain falls toward the higher end of the conventional 9mm scale of 115gr to 147gr).

This round also has some technical features that give it an edge. According to Hornady:

Designed to meet the needs of those who demand superior barrier penetration and prefer a full-size handgun for their personal protection. Critical Duty® is loaded with the tough Hornady® FlexLock® bullet that delivers “barrier blind” performance when shot through common urban barriers.

This solid performance and features put the Critical Duty at #4 on the list.

Gold Dot is considered by many to be the “gold standard” for self-defense ammo. It’s been around for 20 years now and Speer is constantly improving upon the round.  It’s used by a whole host of law enforcement agencies, and Speer even claims that the Gold Dot is the highest-performing 9mm round in the FBI’s testing history. The numbers the +P 124 grain put up on Ammo To Go’s testing gives us a hint as to why it performs so well: A zippy 1,090 feet per second 124 grain round with great all-around penetration of 18.58″ and a strong 0.44″ average expansion, with speed to spare clocking in at just under 1,100fps in testing.

Andrew was very impressed when he reviewed this loading for TFBTV:

Normally, the 124-grain variety would be placed higher out of a longer barreled gun, however, because the subcompact S&W Shield was used in testing, the 124 grain was beaten by #2…

Here we go again. For the same reasons the 124-grain variety is #3, the smaller, faster version is number 2. However, according to Andrew, while the 115-grain variant is better out of a short barrel, the 124 grain might be more suitable in a longer barreled pistol, so feel free to transpose #2 and #3 based on your application.  While there wasn’t much expansion of the 115-grain version (only .35”), the 115 grain Gold Dot had a whopping 33.38” of penetration in gel – the highest in this test out of all of the ammunition compared. Good Lord.

You guessed it. Perhaps the most trusted name and brand in personal defense ammo earns the top slot with the best all-around numbers. Moving the mid-size round at over 1,050 fps, the combo of penetration and expansion was unmatched:

Thus, the HST had the absolute best combination of penetration plus expansion.

What’s more is that the Ammo To Go testing had similar results to Andrew’s own testing as seen here:

So not only did HST perform the best, but it has performed the best consistently. And that’s why this is your best pick for self-defense 9mm ammunition.

A special thanks to www.ammunitiontogo.com for sponsoring this series and providing this excellent data.