Gun Dynamics have announced a crowdfunding campaign to bring XTech Tactical’s Smart Laser to market. XTech Tactical are better known for their grips, magazines and other accessories, the laser is new ground for the Arizona-based company. The Smart Laser has a sensor which detects the shooter’s finger movement and turns on the laser or 200-lumen light.

After over two years of development, XTech Tactical’s Smart Laser is fully developed and a small batch of production units are in hand and tested! They are now offering the Smart Laser exclusively through Gun Dynamics https://gundynamics.com/products/xtech-smart-laser while they await the delivery of their first production run.

The Smart Laser is a green laser and 200 lumen led light combo designed for full size pistols as the ultimate home defense pistol accessory. The unit features a patented and patent pending Sensor Mode. Sensor Mode uses IR sensors at each side of the trigger guard to give the user the ultimate control over the unit’s activation. 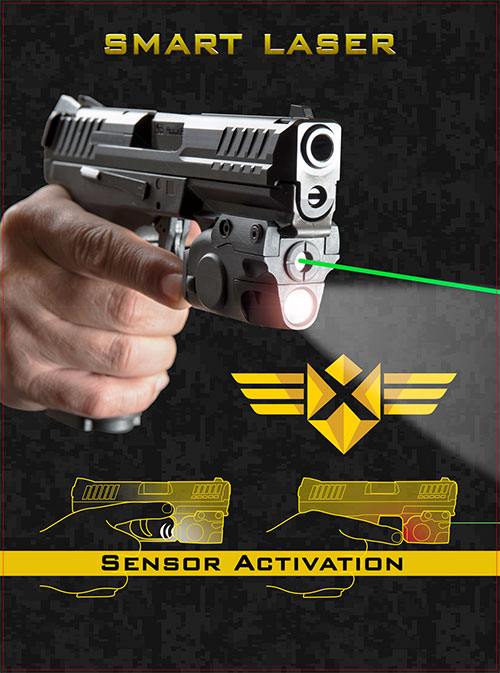 The unit does not require the user to enter the trigger guard and activates as the user breaks the plane below the slide. When using a two-thumbs forward grip, the user will activate the unit by lowering their off-hand thumb. Conversely, if the user identifies an immediate threat the natural action of the trigger finger going towards the trigger activates the unit. Once the finger or thumb go back up to the slide, the unit turns off.

Sensor Mode solves two major problems with alternative units on the market: disclosure of location to a threat and new trained actions under stress. When activated into Sensor Mode the unit scans for 14 consecutive hours which can be restarted or stopped by the user.

The Smart Laser also features ambidextrous manual power buttons if the user desires to use the Smart Laser in a constant on mode.

The Smart Laser offers 5 different combinations of light/laser usage ranging from laser or light only to combinations featuring solid on and strobing. The unit has a memory of the user’s last selected setting.

The Smart Laser mounts onto both picatinny and Glock style rails of full-size pistols and market MSRP will be $179.95.