Most of these photos were chosen as they include some firearms that we don’t see too often in the open. The fact that they’re being used in some very extreme conditions is a bonus.

As you can see in the picture above, the Slovenian soldiers are using the FN F2000. It’s a bullpup I rarely see at all. For more information check Wikipedia. The Slovenian army has bought 14 000 of these odd bullpups.

The ninth edition of the “Edelweiss Raid” mountain competition took place between the February 25 and March 1, 2019, at the Lizum / Walchen military training area in Austria.

The competition has become the unofficial World Championship of mountain soldiers in recent years. In addition to the marching performance of 40 kilometers and 4 000 vertical meters, the teams have numerous military tasks, such as shooting, avalanche burial search and taking care of injured.

The primary goal is to reach the finish line on the second day of the competition with the entire team (8 soldiers).

Below: No Heckler & Koch 416F for these soldiers yet. As you can see they are still using the FAMAS (Fusil d’Assaut de la Manufacture d’Armes de Saint-Étienne). The FAMAS factory closed in 2002. Below: The Italian Team “Alpini”.

Team TFB aren’t sure exactly which firearm they are using, but we think it’s the ARX160 A2 or sometimes referred to as the ARX160 SF (Special Forces). It features a shorter buttstock, an extended Picatinny rail and what gives it away is the short 12-inch barrel. Apparently, It was developed for the Italian special forces and was later adopted by them. Source: http://www.military-today.com/firearms/beretta_arx160.htm

If you know more please tell us in the comments. Below: Looks like they’re shooting their SF Berettas with barrel support, but I hope not. Note the ELCAN sight. Light gun, heavy sight. The Russian Team – with Steyr AUGs which I presume they have borrowed from the Austrian army. International participation is more numerous than ever this year. In addition to Austria, twelve nations participate in the “Edelweiss Raid”. For the first time this year, a team will start, consisting of 8 female soldiers in the international mountain competition.

The Russian Team N#2, with females only. Also with Steyr AUGs. The American Team with some very colorful ski boots. Here you can find a video of day 1.

The German teams finished first and second with Austria on third place. You can find pictures from the awards on Flickr. 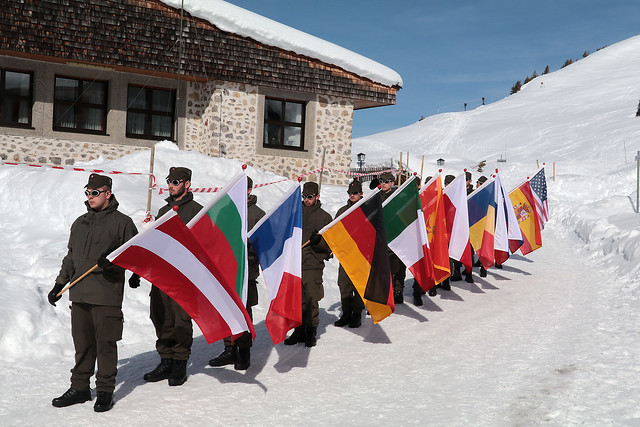 Who will be there first to say: They’re in Austria – where are the Glocks?