Recently, on September 19, Russians celebrated a very unusual annual holiday – “The Gunsmith day”. As usual, I tried to use this opportunity to shoot some interesting weapons and get some footage. The project was named “Kalashnikov evolution”. It documents all main variations of the AK platform created in its cradle – the Izhmash factory in the city of Izhevsk, Russia.

In the first part of the series, I tried to debunk some of the common myths about Kalashnikov himself and his creation. When it comes to the history of the AK, there are two things people argue about: the amount of German influence on the design, role of Hugo Schmeisser and apparent lack of Kalashnikov’s specialised education.

TFB already published several very good articles about the Kalashnikov evolution so I will be brief. When it comes to Germans and Hugo Schmeisser, I can recommend two brilliant articles written by my good friend Nathaniel F:

Those two articles go pretty deep into the history of “German involvement” into Kalashnikov Evolution, but there is something I wanted to add. In the second article, Nathaniel talks about the following opinion “The Russians won’t declassify all the documents pertaining to the AK’s development, because they don’t want to reveal that Schmeisser was the real designer”.

Here is what I have to add. All Russian military documents dated after 1945 are classified by default, including information about the development of the AK. But when those documents will be declassified (working on it right now), there would be nothing there about Schmeisser, because he did not work for the Soviet military, he worked at the factory.

The good news is that most factory documents are not officially classified. One might ask – if they are not classified, why there is no information about what Schmeisser actually did in Izhevsk? The answer is simple – because nobody really cared enough to dig them out. But thanks to Russian researcher and gunwriter Andrei Kulikov, we now have access to documents shedding light on Schmeisser’s activities in Izhevsk. 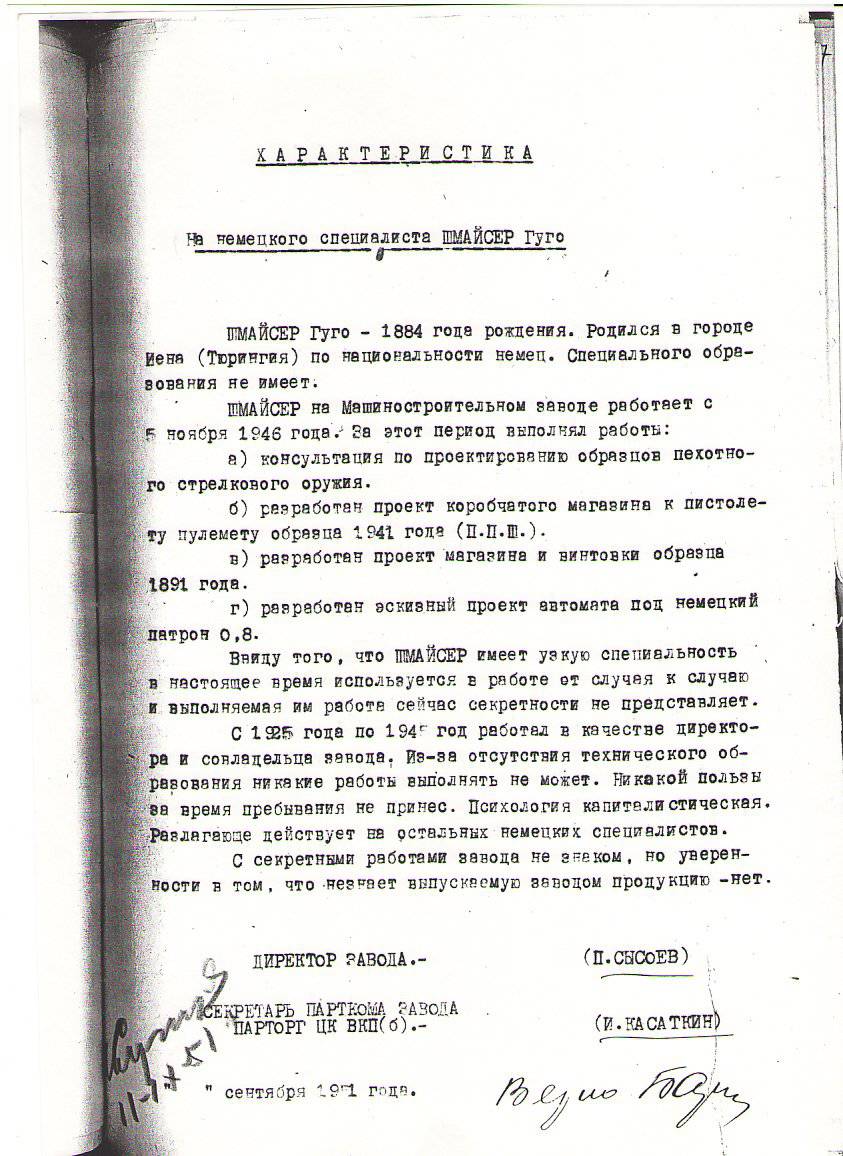 Schmeisser Hugo – born in 1884 in the city of born in Jena (Thuringia), German by nationality. Has no specialised education.

Schmeisser works at the factory from November 5, 1946. During this time, he worked on the following projects:

a) Consultations regarding the development of infantry small arms

b) Developed a project of the box magazine for 1941 submachinegun (P.P.Sh.).

c) Developed a project of a magazine for 1891 rifle (Mosin-Nagant).

d) Developed a sketch project of an assault rifle chambered for German 0,8 round (7,92×57 Mauser).

Since Schmeisser has a very narrow specialty and only used from time to time, his work at the moment is not classified.

From 1925 to 1945 he worked as the factory director and co-owner. Because of lack of technical education, he is unable to do any work. Did nothing useful during his stay. Has a capitalist mindset. Corrupts other German specialists.

Not familiar with factory’s classified projects, but we can’t guarantee that he does not know current product line.

Director of the factory Schmeisser and other German engineers with families. Izhevsk, 1951.

One might think that this profile is an unfair representation of the famous designer, but fortunately, other profiles are also available. Schmeisser is consistently described as “the worst one” among all German specialists, and in a document from 1949, the last sentences in his profile are “refuses to work, explaining it with lack of technical education and inability to independently design. Cannot be used for any work at the factory”.

One thing is clear –  he did not want to cooperate with Soviets and refused to work about the same time when Kalashnikov brought his AK-47 design to the factory where Schmeisser was employed. Nuff said.

So, we already figured out that AK has very little resemblance with STG44 and Schmeisser himself was not involved in the design of the AK-47. But were there any other influences?

AK47 bolt – left, Garand M1 bolt – right. Screenshot from the video by ReadyMan channel, highly recommend it, Jeff Kirkham really knows what he is taking about.

In fact, internally, AK is much closer to American Garand M1. In his first book, “The notes of weapon design engineer”, Kalashnikov mentions John Garand four times, each time with great respect, saying, for example, that “I learned to think outside the box from American design engineer Garand, among others, when I designed my semi-automatic carbine at the end of the war”.

And again, Nathaniel F did a great job analyzing the influence on M1 on an AK in his article:

The second big question is – how “unexperienced” Kalashnikov developed such a successful weapon?

Well, the reality is – when the development of the future AK-47 started, he was not an inexperienced weapons design engineer. Just like Schmeisser, he had no formal education, but by 1946 he already developed FIVE different weapons. His first creation, a submachine gun chambered for 7.62×25 was lost during the war, but every other prototype is still available in the Saint-Petersburg artillery museum collection.

Let’s take a look at them:

It uses a very unique screw-delayed blowback action, so even at the very early stage of his career, Kalashnikov was capable of creating interesting concepts and prototypes. This LMG was not very practical with its 15 round magazine but had a very interesting short-recoil action. This carbine was heavily influenced by M1 Garand, but at the end of trials lost to Simonov SKS.

The second version was more refined and looked a lot like SKS. According to Kalashnikov himself, when he started to work on an AK, he took the bolt design from his previous weapon, this carbine. Thus, when the development of the AK started, Kalashnikov already designed more weapons than most modern weapon engineers design in their entire lifetime. He was in the right place at the right time and did not become a successful design engineer overnight. Obviously, he did not develop his famous weapon exclusively by himself, there were many who helped him. But that is the story for another time.