A corrupt border officer has been prosecuted for attempting to smuggle drugs and firearms into the UK. A joint operation involving the UK’s Metropolitan police, National Crime Agency and French police arrested two other men in connection to the smuggling.

The border officer, Simon Pellett, along with Alex Howard and David Barker were arrested when they attempted to meet in a supermarket carpark to transfer the drugs and weapons.The three men were arrested by French police after transferring three bags into a van. The bags contained 8 pistols, two revolvers and a large quantity of ammunition. 28 kg (44 lbs) of cocaine with an estimated street value of £2.8 million ($3.6 million) and 6 kg (13.2 lbs) of heroin with a potential street value of £600,000 ($775,000).

From the, pretty low res, photos published by the National Crime Agency we can see a number of CZ pistols including semi auto CZ 75s, a Hi-Power, a CZ 75 Automatic machine pistol and a suppressor ready P-07. One of several suppressors seized is also pictured. 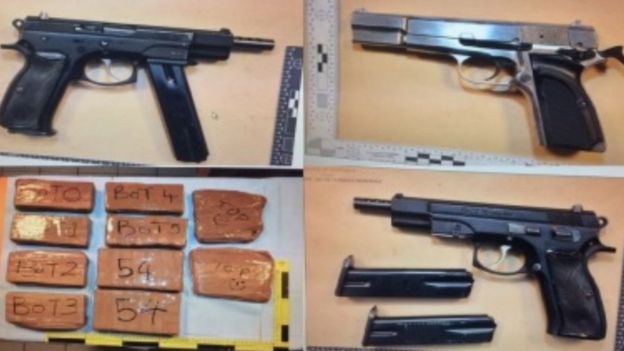 Following their arrest the men were extradited back to the UK and the court heard that Pellet expected to earn up to £20,000 for the smuggling run.

David Rock from the NCA’s Anti-Corruption Unit said in a statement:

As a border officer, Pellet’s job was to prevent the illegal importation of goods into the UK, including firearms and drugs. He had the power to arrest anyone suspected of being involved in this type of crime, yet his personal greed made him susceptible to corruption and allowed him to be exploited by a UK-based organised crime group.

Corruption at the border threatens the safety and security of the UK, which is why tackling it is such a priority for the NCA and law enforcement partners. This operation involved close collaboration between the British and French authorities and is a prime example of our international efforts to tackle cross-border organised crime.

All three men were found guilty of numerous offences on November 12.