What appears to be an AN/M2 .50 calibre heavy machine gun (WA Police)

The working parts of what appears to be an AN/M2 .50 calibre Browning heavy machine gun (possibly just fitted with an AN/M2 barrel) were discovered along with several spare barrels. In addition, four shotguns, an SKS, three other rifles (type not disclosed), 11 handguns including revolvers and semi-automatic pistols, and 19 suppressors.

Vesna Watt, acting ABF Superintendent Investigations WA, said “working together, WA Police and the ABF have taken these dangerous weapons off the street and out of the community. People who think it is ok to attempt to import firearms without the appropriate permits and permissions should know we will stop them and they will face the full force of the law.” 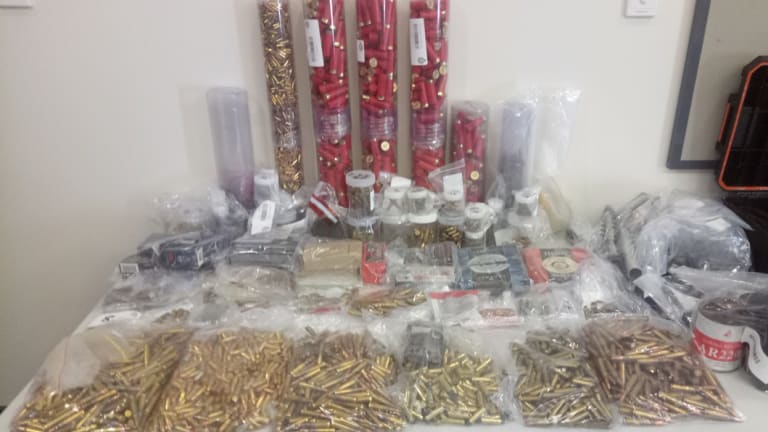 Some of the ammunition found during the police raid (WA Police)

In addition to the firearms, a quantity of Meth was found along with plans for building firearms and a large amount of ammunition were found including: .50 BMG, 12 gauge, and a variety of pistol and rifle ammunition including 5.56×45, 7.62×39, and 7.62x51mm. Detective Sergeant Fraser Mainland from Cannington Detectives said in a Border Force press release that “there is no legitimate reason why someone would need weapons of this type. Many of the firearms seized had been altered or manufactured and would have posed a significant risk to anyone that handled them.”

Detective Sergeant Mainland continued “Illicit firearms are an ongoing concern for WA Police Force in our community. Removing illicit firearms from our community is a priority for all officers and we encourage anyone with information regarding these weapons to come forward.”

The 23-year-old man was charged with multiple counts of ownership of an unlicensed firearm, drug possession, and possession of prohibited weapons.