Posted April 2, 2018 in Other Gear & Gadgets by James Reeves with No Comments Last month, TFB published the “March Gatness” tournament – a readers’ choice bracket tournament to determine which rifle, revolver, and handgun is the best of the best (or at least the readers’ favorite). The winners will be featured in a TFBTV video.

We are in now in Round 3 for Rifle and Auto Pistols, and the Revolver tournament just entered the FINALS today. Some observations from the first rounds:

Over 14,000 votes have been placed in the Automatic Pistol Tournament.

We are at what everyone reasonably expected at this point: Glock 19 versus CZ75, and 1911 versus the Hi-Power.

LOOK AT WHAT YOU PEOPLE DID 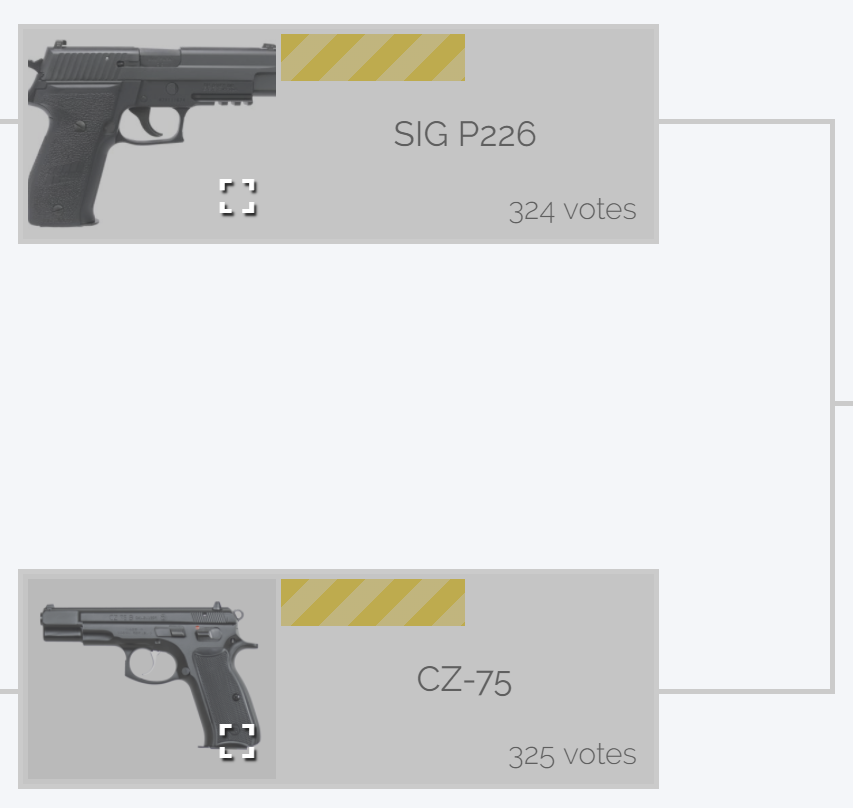 ONE VOTE. One single vote propelled hot garbage into the semifinals over Teutonic-American superiority.

Unbelievable. I hope there are two 226 fans reading this right now that didn’t vote and now feel personally culpable for this miscarriage. Break out the cat-o-nine-tails and self purify yourselves immediately.

To go straight to the Auto Tournament, click here: https://www.polltab.com/bracket-poll/BkRpZw6YM

Over 13,000 votes have been cast to decide the BEST rifle in the world. The results from Round 2:

To go straight to the Rifle Tournament, click here: https://www.polltab.com/bracket-poll/S1J6ecatM

How did the sidearm of choice for classic action film protagonists lose to the upstart S&W?

For Sam Colt’s sake, this weapon is forever immortalized in capable hands of Barney Ross in the Academy Award winning best film ever made, The Expendables.

I guess it just goes to show you that no amount of heavy-hitting-and-not-stale-at-all star power can propel a gun ahead in March Gatness, no matter how many Skinimax quality action films featuring all of your favorite stars from the 1980s/1990s it’s featured in. Gatness never lies.

To go straight to the Revolver Tournament, click here: https://www.polltab.com/bracket-poll/Syq-eoAYf

We’re at the home stretch guys?