I recently picked up an Armasight AIM, which is a novel way of outfitting a rifle with night vision capability. If you’re already intimately familiar with night vision systems (Say, if you know what the pots are and where to find them) and just want to hear about the AIM, scroll down to the first through-the-tube night vision image. Otherwise, read on and lets think together about shooting things in the dark…

If you’re in any kind of armed forces these days, it’s likely that you’ve received some basic training in the operation of a night vision device. While the fundamentals might appear simple (look through it ya grunt!) image intensification technology does require significant familiarization to be used effectively. Fortunately, in a large scale military of any kind, soldiers are given a standardized set of equipment, taught how to use it, and then evaluated on whether or not they are using the device correctly.

Not so in the civilian world. While night vision systems are available to individuals, paying for that kind of equipment out of personal pockets does raise a substantial barrier. You can get a lot fancier toys when Uncle Sam or the Queen front for your gear. 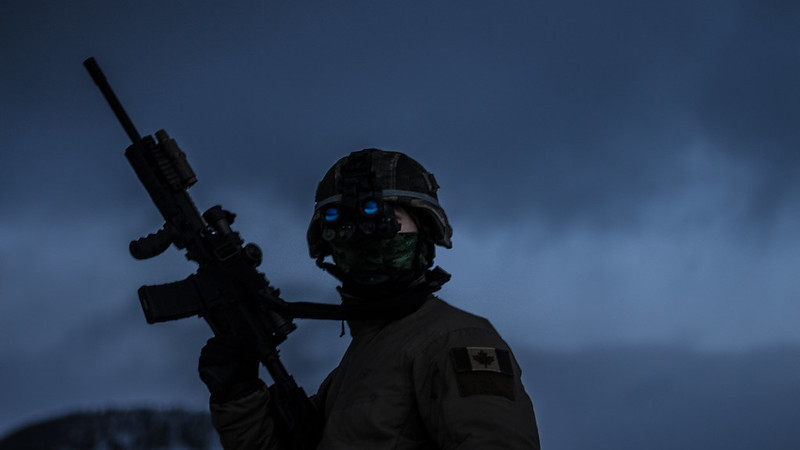 The author’s 2x PVS-14s mated together and loaned to a talented Canadian Forces member.

In a past life, I was responsible for selling Law Enforcement and civilian buyers with a whole host of low-light & no-light solutions. Do you want i2, or thermal, or both? Do you have $3k to spend or $60k to spend? Back then it was important I have some idea what the hell I was talking about (unlike today) which meant doling out cash for a PVS-14, the most common and versatile image intensifier device.

Now the PVS-14 is meant to be a helmet mounted solution. It is all about giving the user enhanced images over the top of their regular vision. One eye is kept free to enhance situational awareness. When a PVS-14 is properly mounted, then adjusted for placement and ambient light, it should feel like heads up display or a spotlight of brightened space that floats in front of your eye. It’s very useful for moving around in the dark and not bumping into things.

But I would always have people asking me for a night vision device that would pull double duty. You want to use your equipment with a rifle, to put rounds onto something after sundown. It seems like a reasonable request but opens the door to a whole new host of gear issues. A night vision monocular has a very low depth of field, and like a camera lens: more light means a shallower focus range. When you’re in the dark you need all the light you can get. It’s also a 12oz device sticking out the front of your face. So forget shouldering your rifle and acquiring a sight picture with irons, optics or red dots.

Lots of armed services will have dedicated night vision rifle sights available for the most rugged bad-asses. But if you’re a civilian a single decent night vision device is already a hit to the pocketbook. The most common night firing solution for both civilians and infantry is a rifle mounted IR laser. The laser projects a beam only visible through the NOD down-range and lets you fire the rifle without a cheek weld or sight picture. If you’re feeling silly you can do it from the hip. 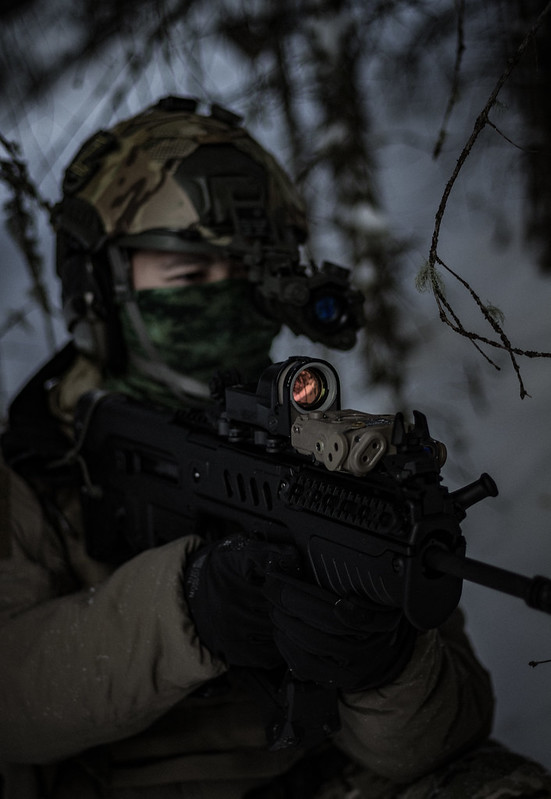 An ATIPAL PEQ-15 IR Laser and PVS-14 monocular working together in a fairly conventional way. Laser stays on the rifle, while NV stays on the helmet. This would be an acceptable firing position.

It’s a pretty effective system, especially when you group together a section of rifleman with a squad leader directing fire using their own distinct IR illuminator. But it has two key drawbacks:

Using an IR Laser presumes that your bad-guys don’t have night vision of their own, or has to accept a heightened shooter signature for peer or near-peer opponents.

You’re also limited to the magnification of your goggle, and the precision of your IR unit. Brighter lasers might seem cool, but if your point of aim is a foot-ball sized bloom at 100 yards you are not going to achieve the same level of marksmanship you would in daylight.

Two other common solutions involved mounting a PVS-14 ahead of a conventional magnified optic, or behind a red dot like an eotech or an aimpoint. In the case of a co-witnessed red-dot, much of the nigt vision image is now covered by the body housing of the red dot. I’ve seen these systems work acceptably, but you’re getting a reduced image quality when adding those additional layers of glass. At night especially image quality matters. You want to know with confidence whether that is a coyote or the neighbor’s cat, or whether that is a goat or a guerrilla (maybe both. Yikes.)

Which brings us to the Armasight AIM. I’m routinely amazed by how poorly photographs through night vision appear. This is a Gen 3 tube with reasonably high resolution, but capturing that on camera is a real challenge.

The AIM is unique in that it is both a weapons mount and a sighting system, designed specifically for night vision monoculars. The front “stem” of the mount actually emits an infrared reticle, which projects back inside the image intensifier tube. I picked up a 3x USGI lens, and the extended version of the mount designed for magnified use, because I feel this is where the AIM really stands apart from other solutions. It creates a functional night vision scope based off the PVS-14 housing that is distinct from other shooting solutions. With a 3x lens and a simple reticle, the PVS-14 behaves sort of like I imagine an i2 ACOG would. Short eye relief, but a solid edge to edge image with a magnification that covers a wide range of plausible shooting scenarios. The emitter is quite an interesting device. It has got lockable windage and elevation adjustments, a wide range of brightness settings, and my version runs on a CR2032 battery. The latest version of the AIM Pro apparently are run off AA batteries. It has a single QD mount on rifle and another QD mount for the optic itself. In theory, the zero is retained in the mount and emitter assembly and will hold a repeatable zero. Overall, including the 3x lens, the AIM, and the PVS-14, you’re adding an additional 25 oz to the rifle. 7 oz for the mount, 6 oz for the lens, and 12 oz for the PVS-14 itself. The way the mount is structured makes the optic appear to sit quite high, but this is substantially more comfortable than say a POSP style optic on another rifle. I have to confess that I’m not entirely certain how to measure the height over bore of this system. Conventional wisdom says “center of the bore to the center of the optic” but in this case, the actual component with the windage and elevation adjustments sits much lower. Using calipers I measure just over 2.25 inches between the emitter and the rifle’s bore, but almost 3.5 inches between the “center” of the PVS-14 and the axis of the barrel.

I think a core part of the AIM’s value is in the idea that it can be removed without affecting the zero, and that remains to be tested by me. As a civilian shooter, I’m a strong proponent of having a dedicated low-light rifle in the safe rather than forcing more kit onto a jack-of-all-trades carbine. I figured for this article a 20″ Colt Canada Sa20 with an A2 flash-hider would be a solid fit for the platform. Stay tuned for range tests and results as the weather warms up…