I try not to buy into hype. When someone tells me new rifle X is being imported to Canada, I ask myself “but how long will the RCMP take to classify it?”

But I also try not to dismiss new things out of hand either. I haven’t tried it, and I as an individual can only ascertain so much by looking at photographs and reading reviews.

The Fab Defense Podium falls into that second category. I’ve had one on my Tavor rifle for well over a year now, and in fact back at Shot Show 2016 I had a little sit down with Tamir Porat, the designer.

So when I heard earlier this year that they had produced an AR-15 version, I had to ask “what the heck is that going to look like?”

Sure enough, the initial press saw the AR version roundly mocked. But not one to simply accept things as good or bad, I set out to try one for myself. Yes, I am a Canadian kid who got his tongue stuck to a frozen flag-pole by not believing what others told me. Being the curious skeptic carries risks.

Lets start with a short run down of each, then we’ll get into shooting experiences. The Tavor podium attaches under the englarged trigger guard and pistol grip. It adds about an inch to the overall height of the gun when folded, and when deployed the legs swing out ahead of your trigger guard and fore-grip. In firing position off a flat surface, the podium puts your barrel 8.6″ above the ground. It weighs 5.6 ounces.

The AR-15 podium comes with it’s own replacement pistol grip, and attaches onto the magazine well of the host rifle. It adds approximately an additional 3″x4″ square profile onto the base of the rifle, essentially creating its own version of the Tavor’s enlarged trigger guard space. When deployed the legs splay out on either side of your magazine well. In firing position off a flat surface, the podium puts your barrel 9.4″ above the ground. It weighs 8.1 ounces. We’re finally seeing more of the AK pattern podium too, which as a Canadian I’m not going to be very well qualified to talk about at all. I suppose one could try to retrofit it onto a Vz58 rifle, but I worry about the trigger guard mounting and magazine release on that rifle. Because of the rock and lock mags on AK pattern rifles, this version looks like it has less potential to obstruct the shooter’s reloading process, but I really can’t say for certain without doing it for myself. I’ve been shooting the Tavor for 5+ years now and had a podium installed on mine since fall of 2015. I shoot with it a lot, but really only deploy it for shooting from prone past 200 yards. It’s important to note than when shooting with a podium, you don’t want to front load it like a bipod. Instead I treat it like a rest: pulling the rifle towards me and into the ground with my off hand.

I’ve run a number of Tavor specific instruction courses across North America together with Lovie out of Israel. The podium sees a ton of use there as a teaching tool: a way to set the gun up on a table and disassemble it for a crowd. Part of our syllabus involves a full field strip, but I often find myself helping shooters remove barrels, install trigger shoes, and replace buttpads over the period of a course. Being able to quickly and firmly stand the gun up makes my life easier. The author, speaking with what can only be described as “exceptional eloquence” on the disassembly of bolt carriers.

Interestingly, I’ve seen a handful of students not fully close their podiums, and not notice that one or both legs are still extended. They don’t notice, because it doesn’t affect any of their regular manipulations of the rifle. This student here is clearing a type 2 (double feed) stoppage dry-fire drill, and completed the entire procedure without noticing or being hindered by his deployed podium. I also use it in the same way that many people have been using grip-pods for years now: as a handy way to ditch the gun (or in many cases LMG) without dropping it in the dirt.

Over the duration of a course I will sling and unsling my rifle approximately ten million times. We gun down for lunch, we’re checking targets, I’m running back to the car for prize patches, etc. For me personally, being able to drop the gun quickly and safely without rubbing the action or muzzle in the dirt is handy. And I know I’m not the only one, because I watch UK troops do it all the time with their L85’s and Grip-pods. 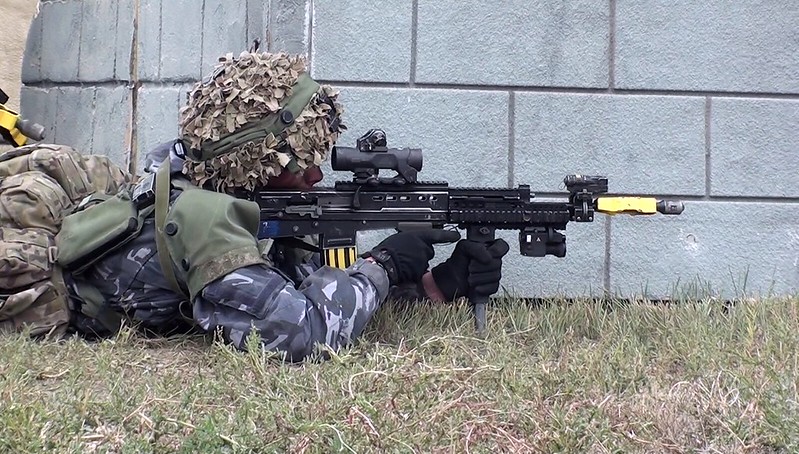 So even when not shooting, my Tavor podium sees a lot of use. It’s cost benefit ratio is high. I can see the train of thought that lead to the expansion of the Podium line. “We’ve got something that works well on the Tavor, why not transplant it to more common rifle platforms?” But the AR-15 does not have the same kind of central balance that a Tavor does. It’s much more front heavy.

My number one concern about the podium is: what does it do better than a conventional bipod? Bipods on Tavors take up valuable hand-space, but on an AR-15? My Colt Canada & Atlas bipod combo work really damn well, I can’t convince myself to change that.

So I opted to try my podium out on a 10.5″ Norinco SBR with an M-Lok forend installed. This is a little gun, it doesn’t have a lot of space for a traditional bipod, and would require an adapter to fit one, so the podium seemed like a more plausible option. Structurally, the podium is solid. There’s no flexing or twisting anywhere in the system. The legs fold and unfold easily just like the Tavor version.

One of my initial concerns watching the promotional videos was that the bipod would become a fulcrum, and that the rifle would bounce with recoil rather than sit steady. With the short barrel and an A2 flash hider, I didn’t find this to be an issue. Instead the rifle planted firmly, and I had no problems ringing the 300 yard gong repeatedly. I could possibly see that fulcrum point becoming an issue if it were say … on an AK in 7.62×39 with a slant brake on the front. The other issue that I wanted to investigate was reloading. I’d seen Tavor users go through drills with their podiums both collapsed and deployed without issue, but the positioning of the legs near the magazine well of the AR raised a flag for me.

Sure enough, with short magazines, or with a beer-can style magazine grip, your wrist will catch the deployed podium leg before the magazine is fully inserted. Not great.

But, if you’re shooting with a regular P-mag, and you index your magazines, they go in freely. I’m a beer-can gripper (must be something Canadian in me) but I recognize that most of the AR shooters I know these days are indexing their magazines into the mag-well. It’s not as big an issue as I’d initially thought it might be.

I still don’t understand what’s going on in the prone shooting portion of their promotional video, but I’d suggest comparing it with my much less flashy range footage and look at muzzle movement between the two.

I feel like Fab Defense missed a major opportunity by not making the podium also include a flared mag-well. It already forms around the mag-well, why not have some beveled ramps to aid insertion? I’ve got a few other AR-15s in the safe that will get their turn with the podium, but I have to wonder with a longer barrel and more mounting options why I would choose this over an Atlas. Maybe an IDF trooper with an M4 and M203 launcher would find it handy, maybe not.

I don’t find the AR-15 podium is “the worst thing ever” which seemed to be the initial reaction of the internet. But I do think its a very niche product that could benefit from some tweaking. When I run the cost benefit calculation, this is faster than a regular bipod, and leaves the forend clear. But it adds substantially to the gun’s overall shape, and can present a training issue for reloading.

In the spirit of weird experimentation, I’m tempted to fit the podium onto a USGI lower and remove the factory trigger guard to create a “mitten friendly” XL trigger guard like the Tavor has. Because the country I live in is cold damnit, and sometimes I want to be able to make things go bang without freezing my hands.

We’ll see what further use I get out of the Podium, and whether it finds a permanent home on any of my rifles.