TINCANBANDIT On The Forgotten Remington Model 16 Probably the biggest reason firearms history is so charming to someone like me is the virtually endless number of different designs that exist. The ceiling for entry to become a firearms designer has historically been extremely low, and with that comes a plethora of ideas, designs, and concepts that reached various levels of fruition. Studying the subject means continually learning about new weapons, and in this case TINCANBANDIT has given us a valuable education on the early Remington autoloading rimfire rifle, the Model 16.

The Model 16 isn’t a very unusual weapon by today’s standards, but at the time few makers (one notably being Winchester, with the Model 1903) were making semiautomatic rimfire weapons. Remington introduced the Model 16 in 1916, and made the decision not to chamber it in the common and popular .22 Long or Long Rifle cartridges, as blackpowder ammunition that would not successfully cycle the action, and which would foul the gun’s mechanism, was still common in both calibers. Instead, Remington – like Winchester before them with the Model 1903’s .22 Winchester Automatic – created a totally new round, the .22 Remington Automatic. Both Winchester and Remington’s rounds had wider cases than the .22 Long Rifle, and both eliminated the heeled bullet configuration of the earlier cartridge. The first part of TINCANBANDIT’s post is reproduced below, but I highly encourage readers to click through and read the whole thing:

Every once in awhile you come across something that is unique and unexpected.

The Remington model 16 rifle is one of those.

For starters the gun used a cartridge unique to this model.

The .22 Remington Automatic was a .22 caliber (5.6mm) rimfire round developed in 1915 for the Remington Model 16 rifle only, no other guns were ever chambered for the cartridge. The .22 Remington Auto fired a 45 grain bullet approximately 950 feet per second, with 90 lb ft of muzzle energy. Due to the larger diameter of the case, the cartridge is not interchangeable with the .22 Short, Long or Long Rifle.

The reason for the unique cartridge was to prevent black powder .22 cartridges (which the standard .22 Short, Long & Long Rifle were originally) from being fired in this gun. Black powder doesn’t work so well in semi-auto guns (another reason the semi-autos arrived on the scene around the time of the adoption of smokeless powder).

To avoid any confusion, Remington put the rifles model number on the box: 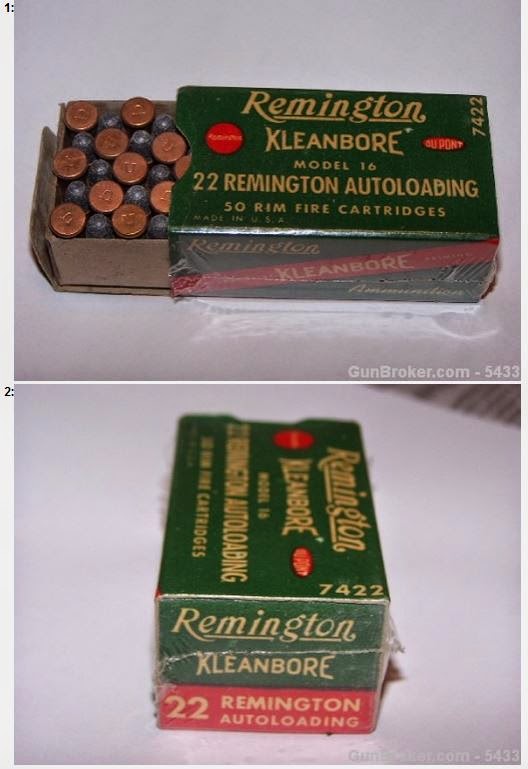 Here is a picture showing the .22 LR on the left, and the .22 Remington Autoloading on the right (the two in the middle are the .22 Winchester Auto, a similar round with a similar story). You can see the diameter of the case is larger on the Remington. This makes it impossible to re-chamber the gun in .22 LR. 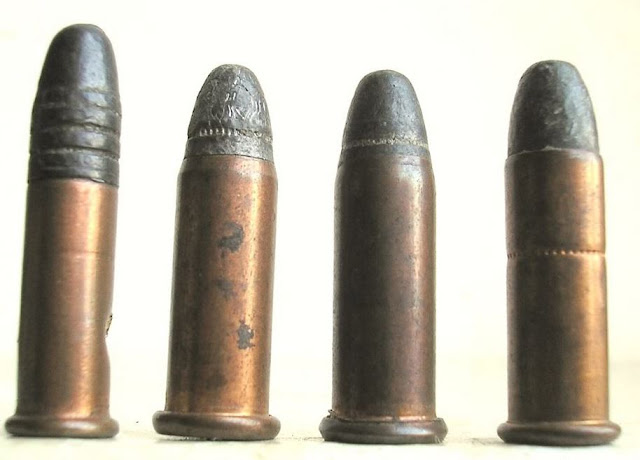 The ammo has not been produced since the 1950’s and has pretty much been relegated to collector status at this point. The picture above is from Gunbroker, I wont say what the seller was asking for this box of ammo, let’s just say…. you don’t want to know….

Another unique feature of this gun is that it is a semi-automatic, in 1916 semi-autos were still a newfangled device. Also, rather than use a magazine tube under the barrel (like most modern .22 repeating rifles), the cartridges are loaded into the back of the stock like a Spencer Rifle.

Remington’s decision to go with a totally new caliber didn’t help the gun’s sales, and in 1928, Remington discontinued the Model 16. In the 1950s, the .22 Remington Automatic cartridge followed suit, and today the Model 16 is a difficult firearm to find ammunition for, with rimfire cartridge not being easily handloaded. Interestingly, both the Model 16 and Model 1903 were takedown rifles, a concept that was extremely popular at the time, but only now is coming back into vogue.