The Remington 700, a favorite of US hunters and sportsmen for decades, is once again gripped in the jaws of a scandal surrounding its trigger mechanism. CNBC recently released a detailed article outlining several recently disclosed company documents, allegedly hidden for decades by protective court orders. Segments of their article are reproduced below:

Secret documents from inside the nation’s oldest gun manufacturer show corporate attorneys heavily involved in multiple attempts by Remington engineers to develop a safer rifle. The apparent fear: changing the design would be seen as an admission of guilt.

The documents, obtained exclusively by CNBC, come to light as the company and plaintiffs’ attorneys seek final court approval of a landmark class-action settlement in which Remington has agreed to replace the triggers in as many as 7.5 million guns. A hearing had been scheduled for Monday, but within hours after this report was first published, the judge postponed it indefinitely.

U.S. District Judge Ortrie Smith cited a “quite low” initial response to the settlement offer. As of mid-August, only 2,327 claims had been filed since the tentative agreement was first publicized in May. The judge ordered both sides to come up with a better plan to notify the public.

“The Court cannot conceive that an owner of an allegedly defective firearm would not seek the remedy being provided,” Smith wrote.

But even now, the company insists the Model 700 — the most popular bolt-action rifle in the world — is safe.

The documents, including hundreds of thousands of pages of internal notes and memos as well as hours of video, shed new light on Remington’s efforts to manage the problem — and the fallout.

In addition, the company said, “Both Remington and experts hired by plaintiff attorneys have conducted testing on guns returned from the field which were alleged to have fired without a trigger pull, and neither has ever been able to duplicate such an event on guns which had been properly maintained and which had not been altered after sale.”

But the newly revealed documents tell a different story. 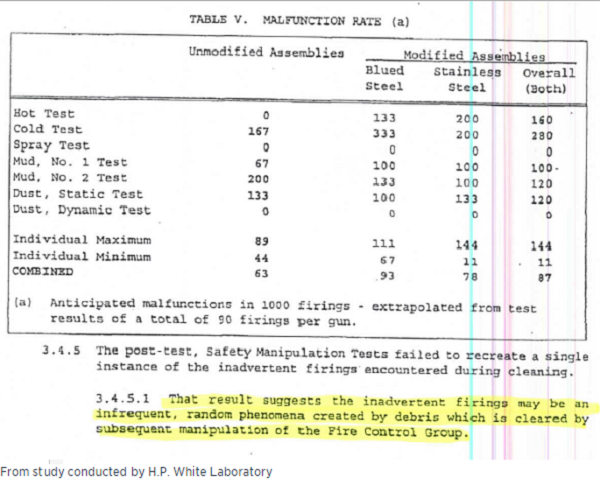 Researchers were evaluating a proposed modification of the Model 700 firing mechanism, and comparing it to the existing design. One of the tests involved blowing sand and dust into the mechanism to simulate conditions in the field.

The researchers say the guns performed normally during the test, so the debris had no effect on safety during the firing sequence. But as the guns were being cleaned following that test, two of them — one with the modification and one without — inadvertently fired, according to the report. But researchers could not get the malfunction to happen again, which they concluded was because the firing itself, and recycling the bolt, cleared the debris. It is exactly the theory that plaintiffs’ experts have alleged for years, and might explain Remington’s claim that it has been unable to duplicate the problem on guns that have been returned.

A finding by an independent ballistics laboratory that Remington Model 700 rifles can inadvertently fire at random might be of interest to plaintiffs in other cases, not to mention the millions of people who own the guns. But the study was hidden from the public until now.

It surfaced briefly in a 2005 lawsuit against Remington by a Texas man, Trevor Williams, who was severely injured when a friend’s Model 710 rifle went off during a hunting trip. A jury found in favor of Remington, but the company nonetheless agreed to pay Williams $1.4 million under a settlement agreement. By taking the deal, however, Williams and his attorneys agreed to keep all of the documents Remington had produced secret — including the lab report — under a protective order both sides agreed to early in the case. Walker’s trigger uses a principle called “sear override”, where the sear, which holds back and releases the striker, sits atop (or “overrides”) a pivoting trigger unit. As the trigger is pulled to the rear, it engages a surface on the sear to a smaller and smaller degree, until finally it has moved out of the way completely, allowing the sear to drop, freeing the striker and allowing the weapon to fire. As the bolt is drawn to the rear, a spring pushing against the trigger holds it in the rearmost position, forcing the sear up and catching the striker. If the safety is engaged, it rotates a piece under the sear, propping it up and preventing the gun from firing.

Problems can occur because the trigger does not at any point positively engage the sear, it merely blocks it. This means that if the rifle is jostled sufficiently violently, or prevented from returning to the rearward position by grit, the gun may fire. The action of the safety also means that a condition can exist where the safety is the only mechanical element blocking the sear and preventing the gun from firing, which could potentially cause the type of malfunction Barbara Barber experienced in 2000 which led to the death of her son, Gus. In that incident, Barbara claims she disengaged the safety on her Remington 700, which lay in the bed of her truck, causing it to fire. In my estimation, this is possible if the rifle was equipped with the Walker trigger shown above, and the trigger unit was for some reason held in the “fire” position.

Given that this is a heated issue, I feel I should offer my personal thoughts. I do not like sear override triggers for the above safety reasons, but firearms are mechanical devices and therefore are subject to failure; this is the reason for the Second Rule of Gun Safety, and it’s also why that is the most important rule. Having said that, tragedies happen, including terrible and unexpected ones like the Barber incident. It’s easy to play Monday morning quarterback from the comfort of my writing chair, but the short of it is that Barbara pointed her firearm in a direction she thought was safe, but wasn’t. I cannot question her judgment of what was or was not safe, as I was not there. Neither, I think, can anyone else who wasn’t there. Likewise, my citing the Second Rule is also not intended to absolve Remington of all responsibility, any more than it is intended to demonize Mrs. Barber. The company chose to use a trigger design that provides an inexpensive solution to the problem of making an accurate and repeatable trigger, but at some cost to safety. It should be pointed out that neither is Remington the only company using this kind of trigger, there are many different rifles on the market with sear override triggers.