In the second half of June, we reported that the Army had released a new second draft of the request for proposal (RFP) for the new MHS handgun, now called “XM17”, slated to replace the M9 handgun made by Beretta that has been in use since the 1980s. The latest news on the grapevine is that the Army will release the finalized RFP before the end of the month. Defense Media Network has the full story, part of which is replicated below:

After a series of preliminary delays, the U.S. Army’s “on again/off again” Modular Handgun System appears to be moving toward release of a formal request for proposals. Recent announcements note that the program, which is now designated as the “XM17 Modular Handgun System,” anticipates RFP release on or about July 31, 2015.

As outlined in early requests for industry feedback, the Army envisions that the XM17 “will replace the existing family of handguns in Army inventory, leverage commercial technology to mitigate gaps and shortcomings in presently fielded weapons, and counter current and emerging threats.”

A draft solicitation for the new system was released in late September of last year, with industry input further supported through multiple industry day events.

In projecting the formal RFP release on July 31, the most recent announcement describes the planned XM17 procurement as “a Full & Open Competition (F&OC) acquisition seeking a system solution that will provide Warfighters with a best-value system that features increased lethality, increased accuracy, improved ergonomics, and a higher degree of reliability/durability over legacy handgun systems.”

The result was an estimated release date for the formal proposal on or about Jan. 2, 2015, with the expectation that “MHS” would be highlighted in several industry exhibits during the January 2015 “SHOT Show” in Las Vegas. And, while SHOT did spotlight a few interesting military handgun designs – including systems like the Beretta M9A3 – the Army clearly missed their planned solicitation release. 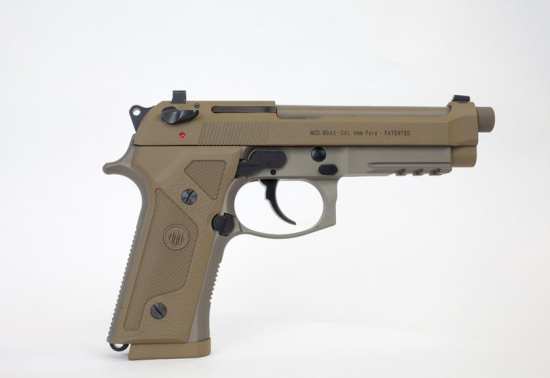 The Army clarified their planning calendar during the second day of SHOT (Jan. 21) with an announcement that the RFP release “would not occur in January 2015” after all and that “Release of the RFP is hereby delayed until further notice in order to allow for improvements to the RFP as a result of feedback received from Industry.”

The spring saw the release of more responses to industry day questions, with another industry day event (the fourth) slated for early July. In addition, in early June the Army released a “Draft RFP #2” that reflects “requirement and source selection updates inclusive of, but not limited to industry feedback.”

In projecting the formal RFP release on July 31, the most recent announcement describes the planned XM17 procurement as “a Full & Open Competition (F&OC) acquisition seeking a system solution that will provide Warfighters with a best-value system that features increased lethality, increased accuracy, improved ergonomics, and a higher degree of reliability/durability over legacy handgun systems.”

Please do click through and read the whole thing.

Expected contestants for the MHS/XM17 are Beretta with the APX striker-fired handgun, Heckler & Koch with the VP9 and/or VP40, a variant of the S&W M&P, and SIG’s P320 modular handgun. Glock, Ruger, and Walther may also enter, the latter having a foothold with their Fort Smith, AR location (which is a corporate headquarters and .22 caliber handgun manufacturing plant shared with Umarex). The winning M17 pistol is expected to be adopted and a contract awarded by 2018.