The constant bugbear in Soviet small arms engineers’ sides after 1950 was the poor performance of the AK rifle in fully automatic. The rifle was for decades very inaccurate in fully automatic fire, owing to its vigorous action and relatively (when compared to pistol rounds) powerful round. A wide variety of approaches were taken to try to mitigate the dispersion in the automatic firing mode, and a Russian blog post covering some of the earliest experiments has been translated by Ensign Expendable of the Soviet Gun Archives blog:

The accuracy of an automatic weapon is important, and many experiments were run on the AK platform to figure out if it can be increased. A number of experimental muzzle devices were built for this purpose. _tezka provided this picture. 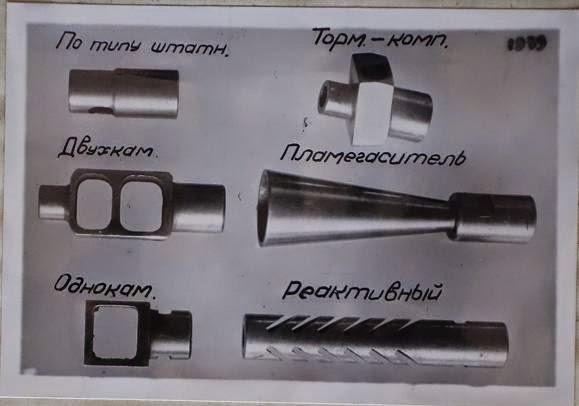 Left to right: similar to stock type, brake-compensator, two chamber, flash suppressor, single chamber, reactive.
While all of these successfully reduced muzzle climb and improved accuracy, there was one important drawback that engineers did not necessarily consider…
“The positive effect of the muzzle brake on the accuracy is at odds with the negative result of the sound wave hearing, which is greatly increased to unacceptable levels with most muzzle brakes.
…
The evaluation of the effect of the sound waves on hearing reveals that all muzzle brakes in the table result in a bothersome or painful sensation in the ears.”
A DShK style reflector was considered to remedy this effect, but…
“…a reflector of such size can hardly be recommended as they decrease the maneuverability and comfort of the weapon and do not achieve the intended result of reducing the sound to a level that does not cause pain.”
Another device was tested to improve accuracy, but it was a different kind of brake.

Curiously enough, it was a brake for the bolt. The experiment was meant to determine the effect of the speed of the bolt flying back and forth on accuracy. The knobs on the sides could adjust the force applied to the bolt in order to slow it down.”

The criticism that the AK’s action is violent was not lost on Russian engineers; the last experiment detailed in the post was an attempt to slow the bolt carrier down during operating, reducing the elastic collision of the bolt carrier bottoming out at the rear of the receiver as much as possible while preserving reliable functioning.

While the later AK-74 would introduce a specialized muzzle brake to mitigate this undesirable characteristic of the Kalashnikov design, the rifles still did not quite live up to Soviet, and later Federal Russian standards for full auto accuracy. As a result, the Abakan trials were held, which resulted in the abortive adoption of the AN-94 rifle by the Red Army in the late 1980s, and later to the balanced-action A545 rifle that passed state trials late last year.