I’ve kept my eyes open for literature regarding the new Brügger & Thomet carbine family, since I managed to miss their booth at the 2015 SHOT Show. Fortunately, Defense Review covered the rifle at the show, which appears to be essentially similar in operation to the AR-180 and G36 (I haven’t seen any pictures of the bolt yet, but I suspect it’s a Johnson-type multilug design):

As long as we’re on the subject of cool new non-AR-type tactical rifle/carbines we should probably mention the new Brugger & Thomet (B&T) AP556, which, according to DefenseReview’s (DR) understanding, will be available in both select-fire/full-auto assault rifle/carbine/SBR (Short Barreled Rifle) and civilian-legal semi-auto-only tactical rifle/carbine models in the near future. DR recently viewed and handled the B&T AP556 at SHOT Show2015, and it looked pretty good for a short-stroke gas piston/op-rod (push-type operating rod). And, frankly, it’s just nice having another tactical carbine choice out there for the ol’ gun safe. Mo’ choices, mo’ betta’. 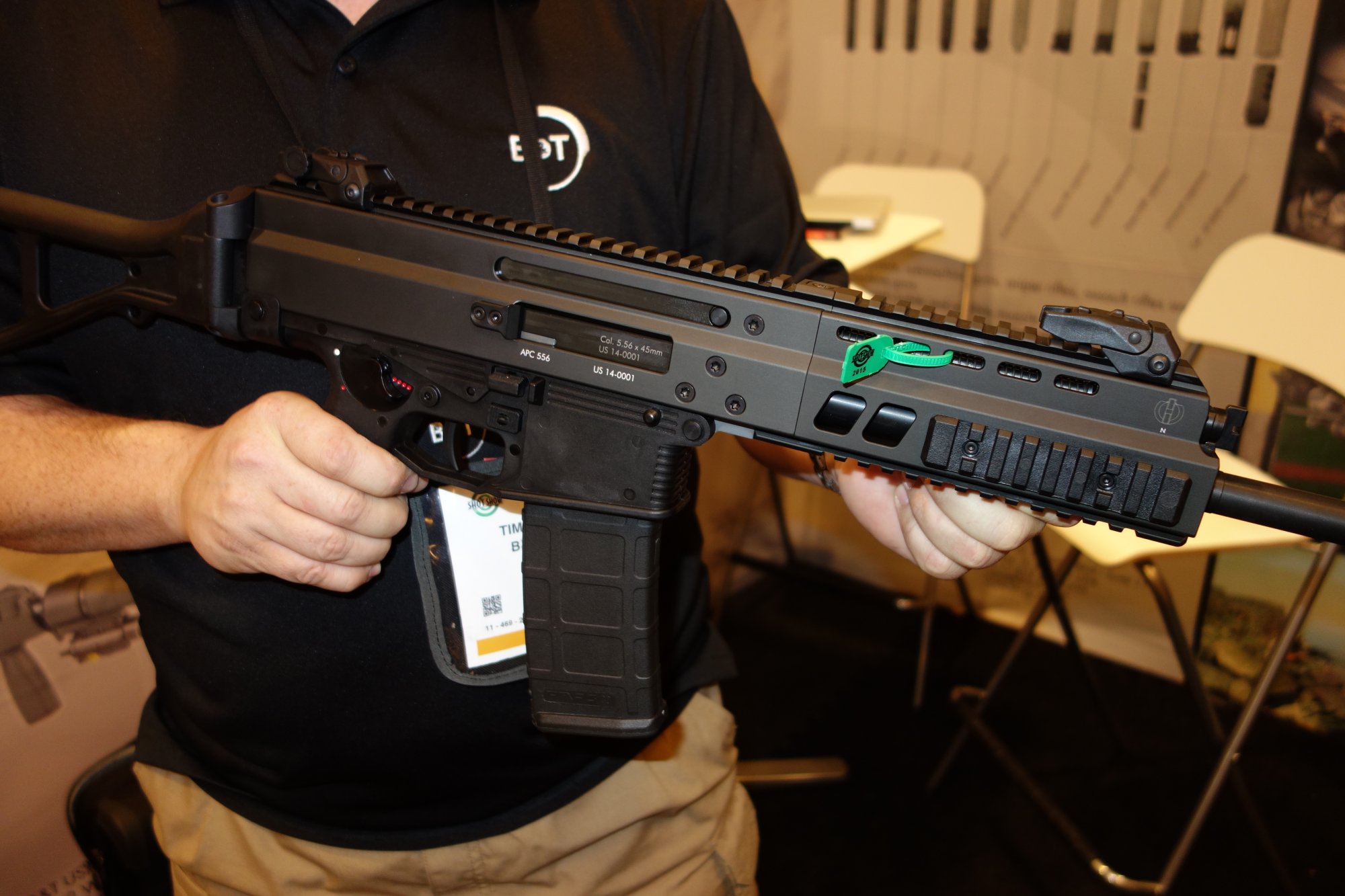 The B&T AP556 (the European civilian-legal version is currently called the AP223) sports ambi (ambidextrous) conrols, including safety/selector switch, magazine release button and bolt carrier release/catch button/lever, as well as a folding stock. However, a telescoping/retractable folding stock is currently in the works, to allow for length-of-pull adjustment. The AP556’s magwell accepts standard AR mags (4179 STANAG), and the rifle currently comes with MagPul PMAG’s, although we don’t yet know how many. The SHOT Show demo gun also featured flip-up front and rear BUIS (Back Up Iron Sights).

The B&T AP556’s charging handle is ambidextrous in that it can be switched to either side. The adjustable gas block has two positions. Barrel length on the carbine variant is 16 inches (16″) (at least on the demo gun), and sports a bird cage-type flash hider/suppressor.

B&T is looking to get the AP556 BATF-complient and imported for sale by summer 2015. Pricing is not yet known.

Defense Review also posted a companion video of the gun at the booth:

The representative says the rifle is expected on the US market later in 2015, and he mentions that a likely early configuration will be the pistol variant (the CZ representatives at SHOT that I talked to also mentioned that pistols are more compatible with ATF import regulations). DR wasn’t the first to cover the APC 556/300; late in January, Aftermath Gun Club also interviewed a B&T rep:

While the rifle is in design another boxy SCAR-esque rifle of the current generation, the design theory behind the gun is a little different than its competitors. For a start, the carbine is intended mainly for law enforcement, to replace 9mm carbines with a more powerful round – namely the .300 Blackout/Whisper – while maintaining the handiness of the sub-machine gun. Such subcarbines are not a new idea, but gearing the weapon specifically to the law enforcement officer is relatively novel.

Second, the rifle isn’t designed to be modular as such – the representative said that conversion is possible, but that since most law enforcement users do not need a convertible rifle, it was not explicitly designed for user-level conversion. Some might consider this a disadvantage of the rifle against competitors like the SCAR or S805 Bren, but I tend to agree more with the B&T rep.

The new APC 556 weighs – according to the brochures available through B&T’s website – a fairly stout 3.57 kilograms (that’s almost eight points) unloaded with a 12″ barrel. Certainly this is heavier than I personally would like, but it’s very typical of new designs in the APC’s class. The APC 300 is a bit lighter, presumably due to its wider bore.

Thanks to commenter MPWS for the tip.