Let it not be said the RCMP does not take terrorism seriously. In response to this past summers’ shootings in Moncton, the RCMP’s retired assistant commissioner, Alphonse MacNiel, issued a report recommending the issuance of police carbines, as well as additional police training. The report is linked above, but CBC News has a good summary:

A review exploring the RCMP response to Justin Bourque’s deadlyshooting spree in June in New Brunswick calls for the force to take immediate action to better arm Mounties — one of 64 recommendations that have all been accepted by the RCMP.

The 180-page report, led by retired assistant commissioner Alphonse MacNeil, was released in Moncton on Friday morning, with nine pages redacted for officer safety, including details about the amount of equipment officers have.

The report urges the RCMP to expedite the deployment of patrol carbines across the force, including improved training.

‘The time it took to roll out the carbine project, including the training and delivery of the weapons to members of the RCMP, has taken far too long.’– Alphonse MacNeil, retired assistant commissioner

A carbine is a short-barrelled rifle that has a longer accurate range than a sidearm or shotgun.

MacNeil’s report says officers were outgunned during the incident, having to rely on shotguns and pistols, while Bourque was armed with a high-powered rifle.

Patrol carbines would have made a difference at several key stages of the shooting that claimed the lives of three Mounties, he said.

“Many … members stated … had the patrol carbine been available, it would have made a positive difference in this incident.” 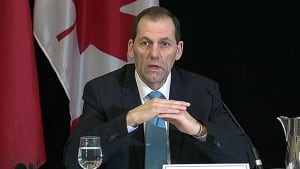 Retired assistant commissioner Alphonse MacNeil, who led the review, said the three killed officers “truly are heroes,” and their sacrifice will never be forgotten by their families, Canadians or the RCMP. (CBC)

Officers told MacNeil there were sightings of Bourque during the incident at distances of 100 metres and they felt he could have been reached with a carbine. Bourque is now serving a life sentence after entering guilty pleas.

Issuing carbines was a key recommendation in 2011, following the 2005 tragedy in Mayerthorpe, Alta., when four officers were killed.

“The time it took to roll out the carbine project, including the training and delivery of the weapons to members of the RCMP, has taken far too long,” MacNeil said in his report.

The carbine procurement process was underway in March 2011, he said. But delivery of the weapons across the country did not begin until the fall of 2012.

As mentioned in the CBC article, C8 carbines were already being procured, however their issuance had not yet reached the New Brunswick RCMP.

Rifles are absolutely in a class of their own, in terms of effectiveness in these sorts of engagements. The combination of ease of use, penetration, high rate of effective fire, accuracy, and range make the carbine uniquely well suited as a police duty weapon. The proliferation of carbines as police weapons is seen by many as a sign of increasing militarization, but despite what the weapons have in common with military articles, there is a clear need for them in at least some departments.