Rifleslinger of Art Of The Rifle has discovered an interesting practical shooting tip: Covering the muzzle of a firearm with a “water grenade” (olive drab colored balloon made to resemble a pineapple grenade when inflated) to prevent dirt or other debris from clogging the bore or harming the crown. His experiments with this method suggest the balloon can be shot off without disturbing the accuracy of the shot:

I have seen people advocate taping the muzzle to prevent foreign objects from entering or damaging the muzzle and the crown.  I have found something that I think is a little easier and probably more effective.  It’s already a nice color too.

Water grenades are water balloons that are made to look like a pineapple grenade.  They are OD greenish.  They are the perfect size to slip over the muzzle.  I think that the gasses coming out of the barrel or the shockwave probably clear a hole for the bullet so that it never touches the balloon.

On Target assembles the group so it can be viewed as a whole: 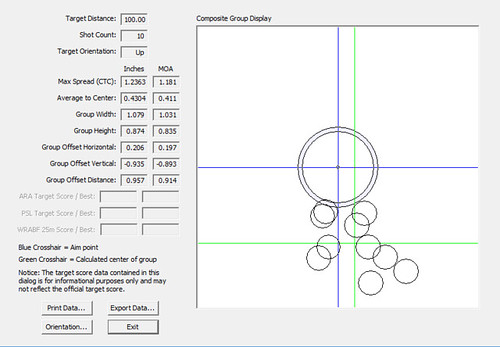 Shots 7 and 10 are at the bottom right of the group.  The cold bore shot is just above those.  I think that the balloon had no effect on the shot.

Balloons are marvelous tools for shooting. I usually inflate a few and use them as targets when taking someone to the range for the first time, but they’re apparently dandy muzzle protectors, too!

What sorts of unusual items do our readers use when shooting? Have you tried anything out that didn’t end up working, or worked way better than you expected? Let us know in the comments!