Can good gear turn even the novice shooter into a long distance sniper? TrackingPoint’s “Precision Guided Firearms” appears to be up to the task. There’s been a fair amount of marketing and hype around this product, and of course, you should never believe something until you see it in person.

I sat down behind a TrackingPoint XS4 .338 Lapua Magnum rifle, which has a Surgeon rifle XL action and a McMillan A5 stock. I received some basic instruction that lasted all of 15-20 seconds. Right in front of the trigger is a button that you use to “tag” your target. Once the target is tagged, the reticle drops down and you realign the reticle with your tagged point. You must squeeze and hold the trigger during this alignment phase, and keep holding it once the reticle changes to indicate that you are aligned.

The next thing I knew, the rifle fired and a second or two later I heard the gong out at 958 yards. Well, it does what it says it’s supposed. That was by far the easiest long distance shot I’ve ever taken. 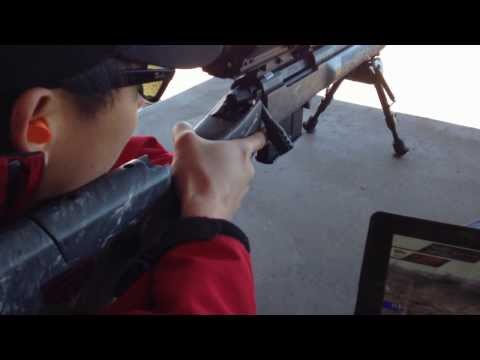