After a super busy year and a broken finger during a 3-gun match, I’ve finally gotten around to finalizing my “Ultimate” Survival Shotgun from the initial post earlier this year. I received a lot of interesting suggestions in the comments from that post, and I consulted with a survival friend of mine. His main advice was to not overload the shotgun with things not directly related to the shotgun. I had been considering installing things like a firestarter kit, compass, and multi-tool, but opted against it.

So looking back on the initial post, I mentioned how this shotgun would be for Northern California where we have a fair amount of pine trees. I had my friend Jordan from Schreyer Weapon Systems in Minnesota do the cerakote, and he did a brown paint job for the barrel. I chose brown since it would blend in well with pine trees. The other consideration was pine green. Go figure. The Stoeger Double Defense shotgun has a picatinny rail, and so I naturally something had to be mounted to it. I decided on a Crimson Trace MVF-515 which has both a red laser and a 200 lumen light. Having a flashlight to see what I’m shooting at in the dark would be helpful, and a red laser would be useful for the dark, and for farther distances. I had thought about just putting on a red dot sight like a Leupold DeltaPoint reflex, but having a light and laser combo powered by one battery is better than having separate sight and flashlight requiring two batteries.

I also decided that Short Lane‘s shotgun inserts were a must. They have multiple inserts, and I chose the popular .22LR, 9mm, and .45ACP inserts since that would give me maximum flexibility as those are very popular handgun rounds. They are very accurate, as you can see in this video: 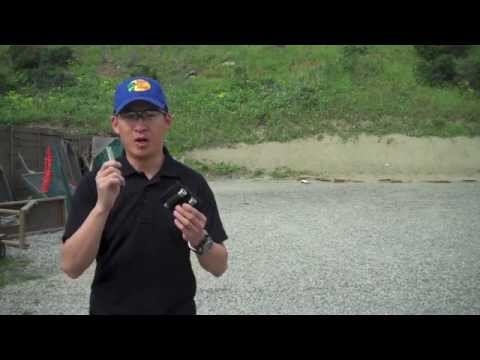 I then opted to hollow out the stock so I could store a few items. Yes, I know there are better tools than a drill for this job, but it’s all I had and I wanted to be scrappy. I had to be careful not to drill too close to the edge since I don’t want the stock to break when I shoot it, so I took my best guess and left a fair amount of material. Pictured here are batteries and condoms. I received the condom suggestion from my survival friend, and also from this blog which mentions how you can put a condom over your muzzle to keep dirt/mud/sand out when not in use since you may be out in the elements for a long time in a survival situation. The condoms can also be used to store water and start a fire. I also have a small Otis cleaning kit in the buttstock (not pictured).

Finally, I really wanted to have a bayonet-style set-up in the event I needed to get up close and personal with an angry hog. In a pinch, I could also use the whole shotgun like a spear. Not that I would want to throw my shotgun, but just saying that it would be an option. I was looking at some pre-fab knife+mount options online, but I wanted to be hacky and do something more by hand instead of just throwing on a mounted accessory. So I took my Gerber LMF II Infantry 10″ knife, got some 550 paracord, and tied the knife to the underside of the barrel. I chose paracord since it’s universally useful gear to have, and the knife will be fine underneath the barrel when shooting. So there’s my “Ultimate” survival shotgun. I’ll now reveal the fact that I sort of dislike articles that proclaim that this is the best or “ultimate” anything, but I wanted to play along and have some fun with it anyway. The main point is that you probably have some excellent ideas that suit your needs, wants, and desires with regards to a survival weapon. With the holidays in full swing, perhaps you can chat with your family and friends to see what you would do for your own survival shotgun. Have fun!