In between the NRA Annual Meeting in Houston, to shooting with our U.S. Olympic Shotgun team in Fort Benning, Georgia, I made a pit stop in Hoover, Alabama to do something really fun — Basketball trickshots using a shotgun.

Let me back up a second. The Legendary Shots is a YouTube Channel composed of a bunch of friends who started doing trick shots back in 2006 when they were all in Junior High School. Seven years later, they have made commercials for the NBA, NCAA, Hampton Inn, and other national brands. The Legendary Shots have also been featured on ESPN and other media outlets. They are close to 21 million views on YouTube. 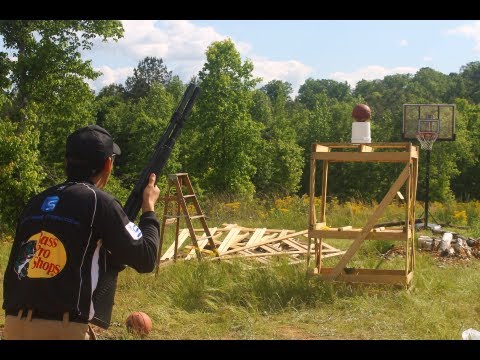 Even though most of them are now in college, it doesn’t mean that the fun has stopped. In fact, they continue to come up with fun ideas, and involving me started off as a simple tweet back in February.

Some behind the scenes stuff — I had my Noveske N4 AR-15 with me, along with my Salient Arms Glock 34 and we had a few ideas with those firearms. However, I only brought 38 rounds of 9mm, and about 100 rounds of 5.56mm along with a scope that wasn’t zeroed. Silly me, for some reason I thought we’d be able to find some ammo in town before the filming. We had plenty of birdshot and slugs though, so that’s what we ended up using for all of the shots. Taking aim at a .143 inch thick rope from 35 yards with my 9mm Salient Arms Glock 34. I ended up using a Benelli M2 with slugs to complete this shot. If I were to do this shot again with a handgun, I’d probably use .45ACP — or bring more 9mm and maybe move up a bit.

With my trusty Salient Arms Benelli M2 shotgun, we were using #7.5 birdshot and high velocity slugs –which did the trick. If you like this vid, feel free to comment here or in the YouTube video comments so we can gauge whether to make a part two. We’d love to hear TFB readers’ ideas for trick shots as well.

All in all, I had a really fun time sharing my love for our shooting culture. Perhaps some basketball folks will go out and try shooting!