You know when you see a marketing claim and you’re curious to see how well it holds up? That happened to me when I saw an ESS claim in their 2013 brochure. Here’s the claim: The ad reads: “ESS high-grade, extra thick Polycarbonate lenses can resist ballistic-force impacts. In this case, a blast from a Remington 12 gauge shotgun firing #6 shot from 10 meters– dimpling but not penetrating the lens.

If you aren’t familiar with ESS, a subsidiary of Oakley, they make eyewear for military, law enforcement, airsoft, fire & rescue, hunters, and competitive shooters. When I contacted ESS to tell them about the stress test I wanted to run, they sent me a few pairs of their Crossbow Suppressors to destroy.

My shotgun of choice was a Benelli M2 modified for 3-gun by my sponsor, Salient Arms International. I started off by upping the ante and at 10 meters, I sent some Winchester Super X 2 3/4″ 00 buckshot up against the ESS 2.4mm thick polycarbonate lens. One of the BBs struck the lens and punched right through.

I guess I wasn’t too surprised, so I dialed everything back and used some Winchester Super X 2 3/4″ #7.5 shot shells I use for 3-gun comps.

Now things got interesting. The first shot separated the lens from the frame, but none of the #7.5 shot penetrated the lens. The first shot separated the lens and frame, but none of the BBs penetrated the polycarbonate lens.

An ESS Marketing rep let me know that the separation was rare, and was probably due to me shooting at pre-production samples. Successive shots continued to impart more damage to the lens but after four blasts, there were plenty of dimples but no through and throughs. The glasses held up solidly until the fifth shot, when a small compromise in the lens occurred.

The fifth shot slightly compromised the backside of the lens where I could see a few visible cracks. I took a sixth and final shot which ended up being the tipping point. Even then, only one BB made its way through the lens. Left to right: An unscathed pair of ESS Crossbow Suppressors; a single 00 buckshot BB hit the lens and punched straight through; the end result of six #7.5 birdshot blasts where there was a full lens compromise.

The full video footage I took is available here: 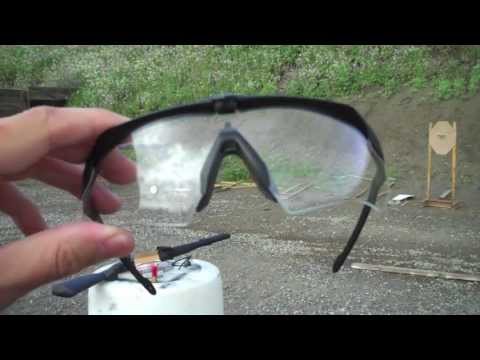 In conclusion, I think ESS’s marketing claim stood up to the test, and then some.