Y-man Goes Shooting in the USA

Hello all, Y-man here. It’s been a long time, and I have missed writing my guest posts. Thanks to Steve for having me. Many thanks for all your kind and constructive comments.

Like some would know, I finally travelled from Nigeria to Orlando Florida, USA in early October, for work and training related stuff. It was a GOOD trip, and in between several days of hard, concentrated work and training, I actually got some firearms related things done. I was able to buy quite a few desperately needed items, and DID SOME SHOOTING!

I arrived Atlanta Georgia in early October after a draining 12-hour direct flight from Lagos Nigeria, and connected to Orlando for another 2 hours. Landing in Orlando, and driving down the road through lush vegetation, and the little lakes to my hotel, I was struck by how similar everything is to Nigeria! The weather was divine.

Whew! Was I knocked out or what?! Jet-lag and confusion on time differences set in, but with the excitement I felt, and luckily, my booked hotel had a room ready for me that morning: my 14 hour flight did not seem too bad after all – I freshened up, and hit the shops.

I started with electronics in Best Buy (Felt like I was in HEAVEN!) Got me the new Galaxy Note 10.1 tablet (The rest of the world is BIG on non-Apple things.), 2 GoPro HD cameras, a good tripod, new Nikon Nikkor 55-300mm zoom lens for my Nikon D7000 camera. It was a hoot! I had to control myself from blowing too much money. It was all made more easy by the fact that my Nigeria Visa Debit Card, full of “Naira” (The Nigerian currency is “Naira”, Google it.) worked perfectly! I was able to pay in Dollars in all the shops.

From Best Buy, I went to Bass Pro at Orlando, on Vineland Road. It was another heavenly experience: seeing all the things I had previously only seen online, and in catalogues, in REAL life. I handled rifles, checked out shotguns, browsed through handguns, sat in several ATVs, and “crewed” a few boats. It was better than Disney World! (Maybe Bass Pro should think of setting up a theme park! With rides and everything…) After taking these items back to my hotel (They FILLED the trunk of the taxi!) I left on a great adventure.

| went off in the evening to the Oakland Ridge Gun Range, an indoor handgun and carbine range, about 25 minutes drive from my hotel. I was surprised the taxi driver was not perturbed that I wanted to go to a shooting range. Imagine asking that in Nigeria: the man would most likely run screaming from the moving taxi (Ok, ok, I exaggerate!) Well, I was pleasantly surprised, I got to the range, no 7-foot tall guard at the door demanding to see my mental health certificate, my passport and my visa, I walked in, nice people, warm greetings all round. I was amazed at the variety of the spread of firearms I saw on display.

I introduced myself, told them I wanted to do some shooting, and got talking with one of the friendly staff, let’s call him “Jim”. He asked if I had ever done any shooting before, and in response, I whipped out my Galaxy Tablet, and opened up a video of me shooting my shotgun from earlier this year. He was impressed, and was even more impressed when he spotted my shotgun stock – I told him I self-fabricated that, and even more when I told him about my homemade slugs. His colleague voiced concern about “you giving that African gentleman range time?” when Jim began to clip my Passport to the Range board, and started to get me a firearm to start with. Jim simply looked the older gentleman in the eye, and told him: “This here is a certified expert shooter, hell, he makes his own slugs!”

So this is how I did: When I was through, I took my remaining ammo to the desk (.22LR, .357, .45.) and was told I could hold on to them for a later visit to the range, as they had already charged me for the full boxes. So I left for the hotel with almost 100 rounds of ammo in my backpack, thinking, wow: if my local Nigerian policeman could stop me now: he’d sh!t bricks!. I proudly took my target papers too. I had gotten some video on the GoPro cameras and will share with you here via YouTube. 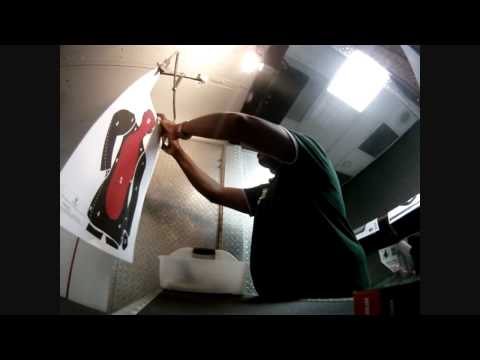 Second Range visit (A day before I left the US.)

I met the older gentleman this time, and he remembered me when I mentioned “the African who makes his own shotgun stock…” Everyone was nice and friendly. “Jim” seemed to have gone out.

This is what I fired:

Can anyone help identify this rifle? Seems like the front sight is fixed backwards! That didn’t stop me from VERY good accuracy.

I can honestly say I walked out from the range both days with a big smile on my face, and on 11th October, flew out of Orlando, via Atlanta to Nigeria with an even bigger smile. I thoroughly ENJOYED myself! Now, back to the Knoxx Blackhawk! stock I bought from Bass Pro. I initially thought to cut the folding stock part off the pistol grip, and bring it into the country on my return. But it turned out I did not need to. I simply brought it in as it is, in my checked in baggage, and got waved through after checks. Of course I had taken it out of the packaging first. So now, for the first time, my Mossberg has a proper folding stock! I have installed it, but testing it will be another story. When it is safe enough to take the shotgun to some distant empty areas, I will test the stock, the H—Viz sights and my new slug designs and let you know.

I really enjoyed my Orlando visit, and hope to make more soon.

Many thanks Orlando, many thanks USA! (And I got the T-shirt too!)