Next week National Geographic will begin airing a nine-part series about a father and son who run a antique weapons business. The trailer looks good … 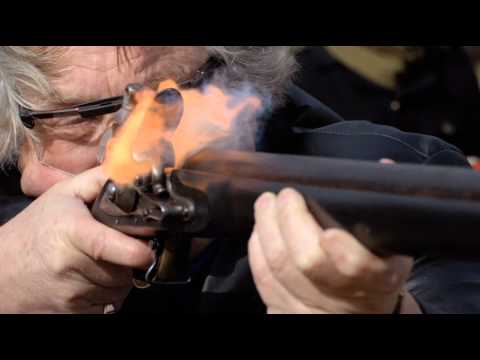 Meet the Indiana Joneses of historical weaponry: father-son duo Christian and Alex Cranmer, whose quests for military antiquities have taken them as far as a remote Nepalese palace filled with more than 55,000 rifles and muskets hidden away for more than a century. “We sell history,” Alex says, and that doesn’t mean books, it means priceless weapons like a $40,000 pistol from the Battle of Trafalgar; a $50,000, one-of-a-kind prototype for Confederate Civil War revolvers; and scores of rare-make World War I and World War II rifles and machine guns.

In the new nine-part series Family Guns, premiering Wednesday, September 12, at 10 p.m. ET/PT and airing weekly Wednesdays at 10 p.m. ET/PT on National Geographic Channel, every day is a live-fire exercise for Christian and Alex, who buy, sell, trade and restore some of the world’s rarest firearms. But with two experts in the family and under one warehouse roof, theoffice politics can be as explosive as the weapons being sold. Family dynamics take on a unique flavor at the Cranmers’ International Military Antiques (IMA), where the questions of the day include whether or not to buy a $250,000 Korean War-era tank; or if it is better to unload a $25,000 British colonial cannon now or let it gain value for later. Figuring out the road to take is no job for the paper-pushers, especially when the only place to learn the real worth of the goods is on the firing range.

But blasting a beat-up coupe with a 200-year-old artillery piece is easier said than done — especially when 250-year-old cannons have a nasty habit of exploding like pipe bombs. It is a game of risk and reward: Can Christian, Alex and the IMA team make the old gun fire? If they can, they know it could be worth double what it was just a second before; if they can’t, they’re standing in the kill box.

The scope of IMA’s business spans centuries of warfare, touching on all strands of history, and is literally built on legend. Their weapons are some of the rarest on the planet and can fetch tens of thousands of dollars from the right customers. To find the collectors who can buy them, Alex and Christian will travel the world to meet buyers and to participate in re-enactments of westerns, world wars and gentlemen’s duels. Pieces from their collection have found their way into museums, store shelves and even movie sets, including “Saving Private Ryan.”

From palm-sized pistols to Cold War tanks and walking sticks turned shotguns, Family Guns has it all. If it’s been fired or if it can fire, Alex and Christian will find it, shoot it and sell it.