NOTE: This product review was made possible by GunsForSale.com.  To get up-to-date information on where to find Mossberg rifles for sale, please visit GunsForSale.com. Special thanks as well to J&E Guns in Bellefonte, PA for helping with the transfer.

Unveiled at the 2011 NRA Convention, the MVP caught lots of attention by having the fairly unique ability to feed from AR-15 magazines in a bolt-action rifle. Later that year it was shown at another event, with the new Surefire 100 round magazine hanging from its action, showing it could fit just about any AR-15 magazine one could jam in it. Designed with varmint hunting in mind, it has a long, heavy barrel, and a benchrest style stock. Here at TFB, we’ve been blessed by Mossberg with one to review.

The rifle itself is moderately heavy, but not absurdly so. With an accompanying piece of glass and a bipod, it weighs in at about 10lbs, which may be a bit heavy to carry around all day in the woods hunting, but is perfectly fine for a varminter to set up on a bench or the ground and cull his or her local prairie dog problem. It comes with one 10 round factory magazine and a gun lock. The combo package also includes a 4-15×50 Barska scope, and a bipod. For this review, I am using a Redfield Revolution 3-9×50 scope, and a Winchester branded bipod. The stock is a beefy, grey laminate, benchrest style stock. It has a palm swell for right-handed shooters; so unfortunately, southpaws may feel a bit left in the cold. Although the weapon can still be used by lefties, it is much harder to maintain a firm grip on the rifle. The stock has a very high comb, which when paired with a scope, offers a superb cheekweld. The pistol grip and forend are stippled to ensure a positive grip. The barrel easily floats free in an ample channel in the forend, and the action is mated to the stock via two aluminum pillars.

The action of the MVP is truly its defining characteristic. The bolt is a 2 lug design, with a small claw extractor, and a spring loaded ejector. It deviates from a standard design at this point to enable feeding from AR-15 magazine. A small arm on the bottom of the bolt face is pushed down by a spring to push the next round out of the magazine.  The arm is pushed back flush with the bolt when the bolt is in battery, or fully opened, to clear the feeding ramp and the receiver, respectively. The arm at first seemed a bit fiddly and small for its purpose, especially considering durability over the long term. However, upon further inspection, the part is quite sturdy, despite its size, and is necessary due to how low in the receiver the magazine sits compared to the bolt. Atop to the receiver, affixed by two allen screws each, a pair of weaver scope bases sit, ready for the scope of the owner’s choice.

The magazine well is quite spacious, and fit any AR magazine I put in it, including Magpul PMAGs, Lancer AWMs, and Mil-Spec aluminum magazines. Best results in feeding came from metal lipped mags, as the polymer lipped mags sat a bit lower in the well, and the bolt tended to ride over the rounds if the magazine was not firmly seated. The magazine release sits in front of the magazine, and is large enough to be easily used. The action, up close

The trigger is Mossberg’s Lightning Bolt Action, similar in operation to the Savage AccuTrigger. A small blade sits inside the trigger proper, and acts as a safety. During the trigger pull, the blade is depressed easily, until it is flush with the trigger face. At that point, no further movement happens until the trigger breaks, cleanly, at about 3-4 pounds with about 1/8th inch of overtravel.

The barrel is a 24 inch long fluted varmint-profile, about 3/4 inch in diameter, and fluted from the point where it leaves the stock to just before the muzzle, to reduce weight and dissipate heat faster. It is chambered for 5.56x45mm NATO, which means it will also fire .223 Remington safely. The crown is angled inward to protect the end of the rifling from dings and dents. The rifling makes 1 twist in 9 inches, stabilizing a wide range of bullet weights, most optimally the 60-69 grain range, but will stabilize 50-69 grain and 70-77 grain bullets adequately.

Mossberg caught some flak about using 1:9, however I can see their reasoning. When using an AR magazine, you are limited in overall length to the magazine’s internal length, which only allows for up to 77 grain bullets, and those are even pushed fairly deep into the case to make magazine length. With no need to stabilize bullets heavier than that, a slower rate can be used to stabilize a wider range of lighter bullets, down to the upper range of lightweight varminting bullets, and most notably, 55 grain bullets, which are the most popular .223 loading.

Shooting the MVP was quite fun, its recoil is very light, especially when shooting from a bipod. The minute recoil is further soaked up by a soft rubber butt pad, making the rifle enjoyable to shoot all day without discomfort. The rifle shot as accurately as I could shoot it, and I feel that if paired with a superior shooter, or a solid rest, more accuracy could be coaxed from it than what I could manage. Sadly, the range I shoot at has a limit of 3 loaded rounds in a rifle at a time, so I had to settle for that in the video. Feeding it in a more domestic setting with a full magazine resulted in no stoppages throughout the magazine. 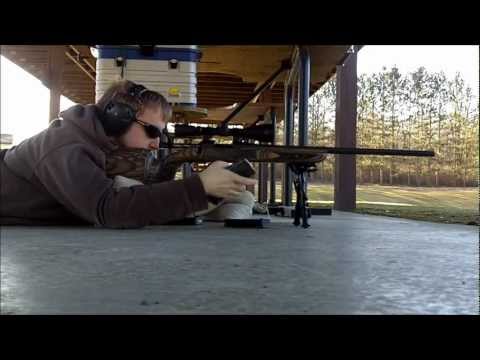 Groups were good, but not spectacular, however I am more willing to attribute it to my poor shooting than to the rifle. Other reviews have shot this rifle to sub-minute groups, and I am more willing to trust their ability than mine. (I really am a rather poor rifle shot, but I am improving). Ammo provided by Guns For Sale for this review was American Eagle 62 grain M855 5.56×45, and Federal Fusion 62 grain soft point .223 Remington, optimized for deer hunting. The M855 shot the larger group of the two rounds at 100 yards. The sticker in the bullseye is roughly 1” in diameter. The Fusion grouped significantly tighter at 100 yards, with the added bonus of being more suitable for deer hunting, although it may not be the best choice for small varmints.

Overall, my personal favorite parts about this rifle were the trigger and the stock. The trigger, while adjustable, comes from the factory at its lightest setting, and I was pleased with how it felt there. Adjusting pull weight is done by removing the rifle from the stock by unscrewing two Allen screws on the bottom of the rifle. A screw at the front of the trigger pack is turned to adjust the weight. I would have liked to see an overtravel stop, but with the minimal amount of overtravel as is, it isn’t particularly needed.

The stock is an excellent choice for this rifle, designed from the start to be used with a scope, so the comb is elevated. The palm swell on the pistol grip fits a right-handed shooter quite well, and allows proper finger placement on the trigger. The forend is widened, and easy to grasp, as well as sits easily and steadily on rests such as sandbags or other flat surfaces, and takes well to a bipod.

Of course, you take the good with the bad, and I have a few gripes about this rifle as well. My first gripe came as soon as I tried to mount a scope on the rifle. The bases, being weaver, will not accept Picatinny mounts, as the slots cut in the base are slightly too narrow. After borrowing a different scope and weaver rings, this became less of an issue, however in my opinion, a rifle made to accept AR magazines should also be able to accept popular AR optics without changing the mount. This isn’t a really major gripe, more of a whine on my part.

The big gripe I have with this rifle, however, is with the fit of the parts, particularly the stock to the action, the bolt to the receiver, and the magazine to action fit. The action of the rifle I was provided with sat a bit off center in the stock, so that the barrel is noticeably off center at the end of the forend. It is not enough to cause the barrel to contact the stock, but it is enough to bother me slightly.  The magazine well on the rifle held magazines very loosely, with a lot of back and forth play, even apparent with the portly PMAGs. I also found it hard to tell when a magazine was fully seated, resulting in a few failures to feed, especially with PMAGs. The bolt to receiver fit bothered me a good bit. At fully open, the rear of the bolt could wiggle in any direction about half an inch. That is roughly comparable to the play apparent in my 1943 production Mosin-Nagant, not something I was particularly pleased with in a new production rifle. This made the action rough, exacerbated by the magazines already requiring more force to feed rounds than other bolt actions.

All in all the MVP is a solid rifle with a neat feeding gimmick and cheap, plentiful magazines, and at $649 MSRP, it won’t break the bank. As it stands, I feel its niche is for varmint hunters that are barred from using semi-autos due to state law, or as a fun range toy. I feel that with a bit more focus on fit and finish, the MVP will go far in Mossberg’s lineup.