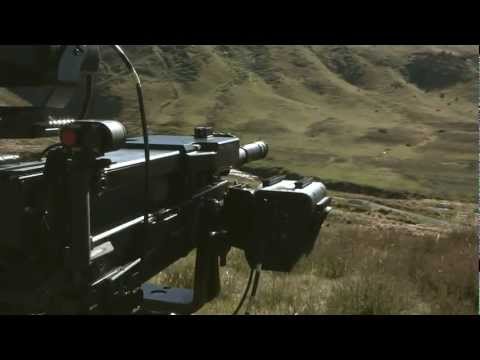 The H&K GMG is very similar to and fills the same role as the Mk. 19 Grenade Launcher.

As I frequently say, “don’t buy a automatic grenade launcher if you are not going buy a decent scope”. The NZ Army went with the Rheinmetall Defence Vingmate FCS electro-optical system.

The Fire Control Unit (scope) is mounted alongside the barrel and connected to the Display Control Unit (display) mounted above the receiver. This allows the operator to rotate and tilt the display as required independently on the direction of the barrel (you can see a soldier looking into the display at a downwards angle in the video). The system includes a ballistic computer, range finder and GPS increasing the chances of first hitm, and so saving ammunition and avoiding collateral damage. The Vingmate can be used for direct fire, indirect fire, area suppressions and airburst.

The image below shows what a soldier might see looking at the Vingmate FCS display unit. The Vingmate FCS daytime scope has a 5x zoom, the display unit has a 800×600 resolution and the entire system weighs 12.7 lbs (excluding battery!).