An Australian company has claimed to have developed truly recoilless rifles capable of firing .308 Win. (or equivalent) rounds. 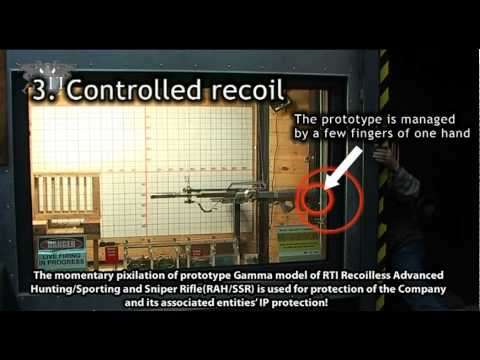 Is this real or an elaborate hoax? It does seem pretty incredible.

A slow recoiling gun is a lot more comfortable than a fast moving gun, for example compare someone pushing you slowly with two open hands with being punched by one fist. The fist is going to be a lot more painful. The easiest way to reduce recoil velocity is by making the gun heavier, including adding heavy metals inside the gun like mercury recoil reducers. Another way to achieve this is using spring, hydronic or rubber (recoil pad) buffer systems.

There is no way to cheap physics. The only way to actually remove recoil is to cancel it by directing energy in the opposite direction of the projectile. This technique was pioneered by the inventor of the Davis Gun , an early aircraft gun, in 1910. The Davis Gun fired both a real bullet and a dummy round, made of shot and grease, at the same time. The dummy round was fired in the opposite direction of the bullet. Davis Gun. Mounted on top of the Davis Gun is a conventional machine gun.

Later recoilless rifles, most famously the Bazooka of WWII, achieved the same result by directing the projectile’s blast behind the shooter. At least one bullet (not warhead) firing rifle still in production today, the Croatian RT-20, uses this technique. Modern shoulder fired rifles use muzzle brakes to direct gas back towards the shooter, canceling some of the total recoil.

Two Russian assault rifles, AEK-971 and AK-107 have counter/balanced recoil systems where a mass is directed in the opposite direction of the bolt/piston. Neither of these guns have been produced in any large quantity and are said to be overly complex to maintain.

I suspect that the gun in the video above is very heavy, is using some sort of counter/balanced recoil system and is firing weak loads, thereby appearing to have no recoil.