Ruger has just announced a new .22 chambered plinker / tactical trainer pistol. This gun completes Ruger’s line of pistol, they now have a pistol for every occasion. Unlike its centerfire cousins, the SR9 and SR40, it is a single action with an exposed hammer, not striker fired. It has a polymer frame, adjustable sights, picatinny rails and rubberised grips. The gun will compete with the Walther P22 and the S&W M&P22 pistols.

Whilst I like this pistol, I am slightly disappointed that Ruger did not pattern it 1:1 on the SR9/SR40 pistols. The grip, controls and, of course, the action are not the same the larger centerfire pistols. The 10 round magazine is also disappointing but I fully expect that Ruger will announce a larger capacity magazine later this year. My last complaint is the name. Ruger also has a SR-22 rifle, so googling for “SR-22″ will return two years of webpages and videos written about the SR-22 rifle. 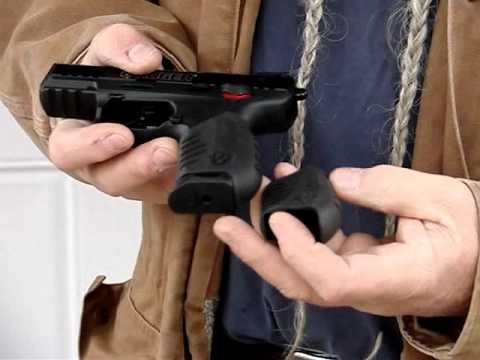 Sturm, Ruger & Company, Inc. (NYSE: RGR) is proud to announce the new Ruger® SR22™ pistol, the do-it-all .22 pistol for the shooter who appreciates style and demands reliability. The SR22 is a rugged, scaled-down version of a full-sized pistol, perfect for plinking, target shooting and small game hunting. The lightweight SR22 has modern styling and is fun to shoot while using inexpensive rimfire ammunition.

“Ruger has built a solid reputation for excellence in rimfire pistols with the Mark III™ and 22/45™ product families, and the new SR22 will contribute positively to that reputation,” said Chris Killoy, Ruger Vice President of Sales and Marketing. “This pistol is feature-packed and an incredible value – consumers won’t find a similar product with everything the SR22 offers at a comparable price. It functions with all types of .22 LR ammunition for extreme reliability; once rimfire enthusiasts pick it up, they won’t want to put it down,” he concluded.

The SR22 has light double-action and crisp single-action trigger pulls. Its external hammer is designed with a rounded spur for easy cocking and single-action shooting. The SR22 features a polymer frame and two interchangeable (no tools required) rubberized grips with angled serrations, allowing shooters to select either a slim or wider palm swell option. The aerospace-grade aluminum slide has serrations on both front and rear for better grip and slide manipulation. The easy-to-use underside Picatinny rail features multiple cross slots for variable mounting of most popular accessories.

The 3-dot sight system has a fixed front sight and a rear sight that is adjustable for both windage and elevation. A reversible blade allows shooters to select two white dots or a solid black blade. Other SR22 features include a stainless steel replaceable barrel, an ambidextrous manual thumb safety/decocking lever, ambidextrous magazine release, plus a visual inspection port to determine the load status of the pistol. The SR22 includes two finger grip extension floorplates that can be added to the magazine for comfort and grip. Each SR22 is also shipped with two 10-round magazines and a soft case.

[ Many thanks to everyone who emailed in this link. ]