A member of the Cast Boolits forums posted photos and video of a rifle and .700 caliber cartridge he designed. The only component he did not make himself was the barrel. The rifle uses a shell-holder style action. My understanding is that the difference between a shell holder and a bolt action is that a shell holder lacks an automatic ejector and must be entirely removed from the action in order to load a new cartridge. Note how in the video below the shell holder, holding the cartridge, it loaded into he rifle. The rifle is accessorized with a Magpul pistol grip (probably the largest caliber gun to ever be fitted with a Magpul accessory), a Limbsaver recoil pad and a Aimpoint comp M4. 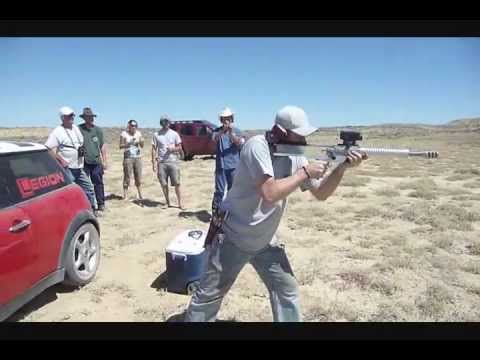 Juding by the video case extraction is tough. If you miss your shot at a charging T-Rex, you need to be able to reload quickly.

[ Many thanks to James T for emailing us the link. ]