Longziz purchased his first AR-15 when he was studying in the USA and it inspired him to design his own rifle. A few years later, now studying in Germany, he has unveiled his patent-pending design which he named the Longziz #1. The rifle is fully ambidextrous. It uses AR-15 lower receiver and trigger group internally. The AR-15 trigger group is connected by a trigger linkage to the forward bullpup trigger (he admits the trigger, like most bullpups, has an awful feel to it). 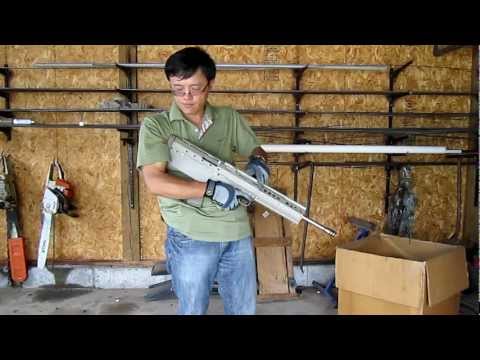 The triangular Longziz #1 bolt carrier next to an AR-15 carrier. The AR-15 lower inside the Longziz lower.

Using an AR-15 lower receiver internally is genius. It means he could sell the rifle as a kit (minus the AR-15 lower) without having to be licensed with the BATFE.

[ Many thanks to Jonathan for emailing me the link. ]