Since I last wrote about it last year, the GMG (Gas Machine Gun) has come a long way. It no longer resembles a pistol carbine, but instead a large bullpup rifle. 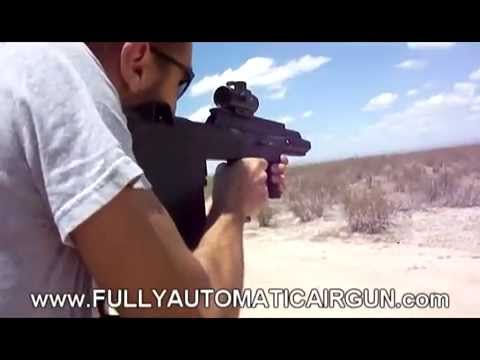 The 50-round drum magazine is loaded with reusable shell casings. The gun can fire anything that fits into these shell casing. At the muzzle, it will push a 16gr lead ball at a speed of 600 fps (12.8 ft/lbs). The receiver is made from steel. It has a 24 inch barrel and quad picatinny rails. Unloaded is weighs 7 lbs. It requires an external paintball-compatible tank filled with Nitrogen or HPA. The inventors are selling each of the 15 prototypes for $1,000. Not cheap! The idea of practical air guns for self-defense and offense go back a long time. The most famous military-style air gun was the Girandoni rifle as used by Lewis and Clark. One notable advocate of air guns for self-defense was the late activist/inventor Philip Luty. Luty designed and published the blueprints for an air submachine gun although I have never seen evidence that anyone ever successfully built it.