The UTAS UTS-15 shotgun holds 14 rounds in two side-by-side 7 round magazines. Unlike the Kel-Tec KSG, the shotgun is capable of feeding continuously from both magazines without manual intervention. The below video shows a 14 round magazine dump. 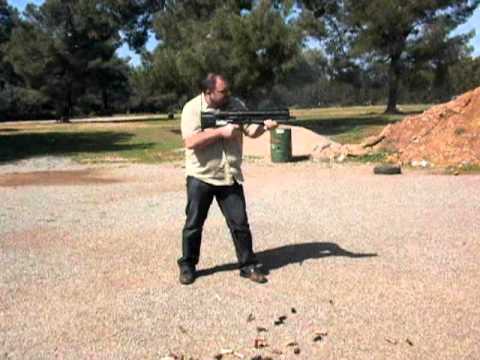 Turkish firearms design company UTAS used the IDEF exhibition in Istanbul to unveil a new combat shotgun, which it claims addresses all the shortcomings of current products on the market.

The UTS-15, which features a magazine top-feed system and light-weight carbon fibre and polymer construction, weighs 3kg and is 71cm long and yet is capable of holding 15 rounds.

UTAS director of manufacturing and product development Ted Hatfield said the company had originally been approached by Smith & Wesson to develop a high-capacity, short, robust and yet simple to operate pump-action shotgun.

However, following the development of a prototype, the US firearms company pulled out of the project and UTAS decided to take it forward itself.

Designed for use by police and military forces during urban engagements, the shotgun features automatic alternating or selectable feed dual magazines, with quick loading ports, compressible magazine springs and shell counters. The company claims that the UTS-15 is the fastest loading shotgun ever designed.

Hatfield highlighted aspects of the design to Shephard, including a selector that allows each magazine to be selected, a collapsible follower that removes any pressure on the last round, and an action that loads the shell at the same speed regardless of how fast or slow the pumping action.

The shotgun also features a point-and-shoot spotlight and laser night sight as well as an integrated top-mounted picatenny rail for iron sights or optics.

Hatfield said the company was hoping to move into full production of the
UTS-15 before the end of the month and was currently looking at tooling and manufacturing options in the US.

We have done hours of tests and fired thousands of rounds, and we are extremely happy with the design the shotgun is capable, robust and simple to operate and maintain.

It is an interesting departure from blackpowder replicas and traditional side-by-side shotguns for gun designer Ted Hatfield.

Max Popenker took some time off from his vacation to visit the Turkish firearm manufacturer UTAS Makina, maker of the interesting UTAS UTS-15 bullpup shotgun. He has described the workings of the shotgun in detail at guns.ru.

The shotgun will be available in the USA at some future date.