Steyr-Mannlicher, which is located, naturally, in Steyr, Austria, has been hammer forging barrels longer than any other firearm manufacturer. They’re located in the same town as GFM, the company that manufactures the massive, complex, and very expensive hammer forging machines used by nearly every large arms maker in the world. We visited their ultra-modern facility, constructed in 2004, to compare their manufacturing processes to the other companies that we’d visited on our whirlwind tour of Europe.

Among other weapons, Steyr makes the iconic AUG, the world’s most successful bullpup assault rifle, and a weapon that can still go head-to-head with new bullpup rifle designs despite being over 30 years old. Every Austrian-made AUG has a hammer forged barrel. The barrels for these rifles are manufactured exactly as described in this video, with one notable exception – military AUGs are profiled (outside diameter turned down on a CNC lathe) after hammer forging, as required by their military specifications and contracts. Civilian AUG barrels are not profiled after hammer forging.

All Steyr barrels are manufactured on the machine you see in this video. Unlike other companies, the Steyr hammer forge was enclosed in its own room. This kept noise near the hammer forge far lower than we were used to after seeing over half a dozen other hammer forge machines in operation.

Another thing that impressed me was the number of times each individual rifle barrel was visually and physically inspected. The Steyr employees didn’t mess around when it came to quality, and they were all highly experienced.

Be sure to watch the video in HD so you can see how that Pro Hunter in the final video clip shoots! 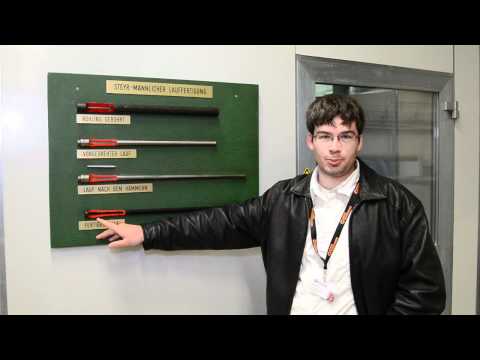