The next generation AK has finally been given a name: AK-200. Last year I posted photos of the prototype. It featured a 60 round magazine, folding stock, plenty of picatinny rails and a bipod/handguard. The final model retains the rails and 60 round magazine but now uses what appears to be a folding skeleton-style stock . This video briefly shows the rifle … 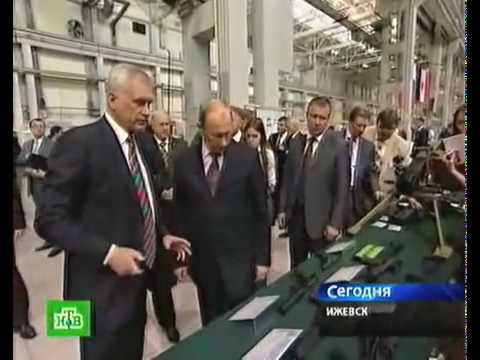 On Tuesday, the AK-200’s advanced characteristics were appreciated by Prime Minister Vladimir Putin, who visited the Izmash mechanical plant in the Russian Urals city of Izhevsk, where the legendary Kalashnikovs are currently assembled. Alexander Baditsa, an Izhmash spokesman, explains:

“The AK-200 is designed to contribute to a full-blown modernization of the Russian Armed Forces. Significantly, the new model is based on the AK-74, internationally known for its reliability and ease of use , the AK-200’s sophisticated design is fully in tune with new demands for waging modern warfare. The new Kalashnikov differs in weight and the magazine capacity, citing a 60-cartridge magazine the AK-200 is equipped with. It is safe to assume that the new Kalashnikov‘s characteristics are on a par with those of assault rifles currently used by NATO troops.”