I did not realize that physics would allow spudguns to achieve the level of power achieved by Sureshot’s cannons.

Most of Sureshots guns operate by injecting Methylacetylene-Propadiene gas into an expantion chamber and then igniting it.

The BL-415, which uses the Methylacetylene-Propadiene gas system, can generate up to 450 ft/lbs of muzzle energy. That is around the same muzzle energy of a .45 ACP round!

For comparison, the FN 303 less-lethal launcher generates just 16-24 ft/lbs of energy. The most powerful “less” lethal 12 gauge, 37mm and 40mm rounds top at just over 100 ft/lbs. The Sureshot guns could not be considered less-lethal.

The 60″ long tennis ball sized barrel of the BL-525 can generate 2000+ fl/lbs of energy if loaded with a proprietary 4090 grain UHMW/steel projectile. That is more energy than a 6.8mm Remington SPC cartridge!

Impressive? You have seen nothing yet … The below video shows a proof of concept developed for a Mexican defense contractor. It fires a 6790 grain projectile and generates 3000 ft/lbs of muzzle energy!!! That is more than a .308 Winchester! 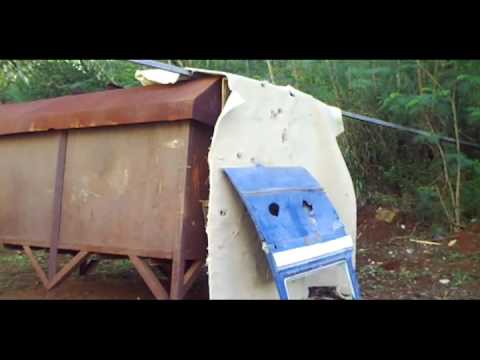 Check the legality of spudguns in your state or country before you embark on building one.